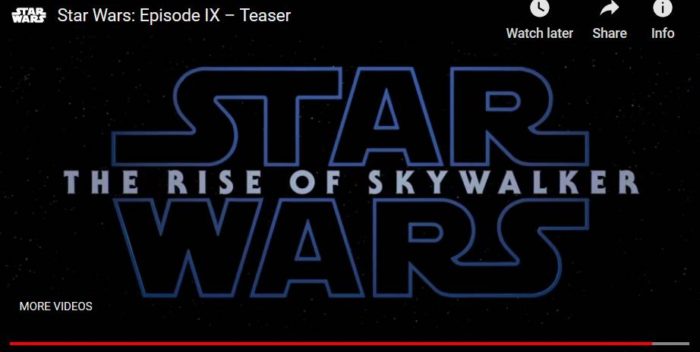 The name of the last “Star Wars” Movie, aka Chapter 9, is “The Rise of Skywalker.” It’s the end of the saga after 42 years, with these characters.

Han Solo is dead. Maybe. General Leia will be soon. Luke Skywalker? He’s just bummed. The party is almost over. The “Star Wars” we’ve known since 1977 is coming to an end.

On Bloomberg Television today, Disney chief Bob Iger said: “We will take a pause, some time, and reset,” he went on to say, “because the Skywalker saga comes to an end with this ninth movie. There will be other ‘Stars Wars’ movies, but there will be a bit of a hiatus.”

The last “Star Wars” movie is set for December 20th. “The Rise of Skywalker” –because it is the end- will be the biggest box office draw ever. If “Star Wars” returns some time in the future, and it will, the saga of the Skywalkers, Han, Leia, R2D2 and C3PO will be closed to history. This means new writers will have to think up iconic new stories and characters. Good luck.

The nine “Star Wars” movies plus “Rogue One” and “Solo” will live on, on Disney’s new streaming service, in merchandise galore, etc. Cash registers will be ringing for eons while Disney-Lucas Film comes up with new entertainments. But it will be said to say goodbye.

PS New rumor out there is that somehow Han Solo will be resurrected for Episode IX. We saw his son Kylo Ren kill him, but you know, it’s the movies. It would be nice to see that reversed. But let’s not get ahead of ourselves.