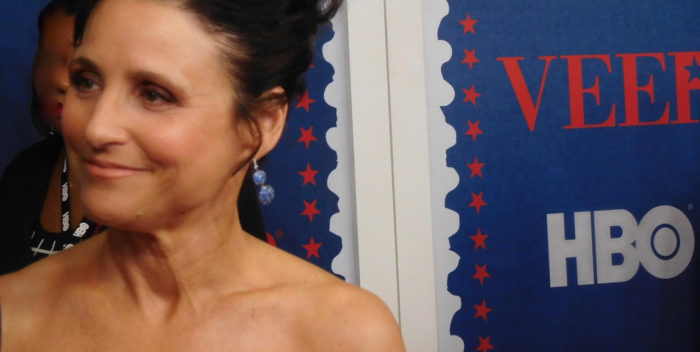 “Oh my god! I’m gonna miss this character more than I can say. It’s sort of like playing a toddler in a very tight dress and heels,” said Julia Louis-Dreyfus about playing Selina Meyer, perennial presidential hopeful of the hit HBO series “Veep.”

Louis-Dreyfus arrived with her husband, Brad Hal,l and their son,s Henry (26) and Charlie (21). The moment must have been particularly sweet for the 11-time Emmy winner; back in September 2017 she announced she had breast cancer and the show went on hiatus. A year later she said she was healthy and returned to finish the final season of the show.

Now she was on the red carpet at the show’s final season premiere; she looked healthy and terrific in a glittery strapless black gown and towering high heels. Flashing smiles and fielding questions with grace and wit, she was careful not to spill the beans on how the season would unfold.
Talking about how emotional she became when she filmed the last scene of “Veep” was another story.
“I wept like a baby,” she confessed.
A journalist asked: Like snot crying?
“The whole deal. I was sincere about it.”
By the end of the show, how does she  think Selina has evolved as a politician, mother and human being?
“I’m going to say, without giving anything away, that, by the end of the final episode, she is at her very essence,” said Louis-Dreyfus.
What are you going to miss about her most?
“I’m going to miss playing that person. What I’m going to miss most, is being around people whom I adore more than I can possibly articulate. That’s the truth. I’m going to miss playing a hyper, dysfunctional, narcissistic, undeveloped, ruthless human being.”
Do you feel like you got to let some of your own frustrations and anger, and things you wanted to say out through her?
“Well, I don’t know if it was things I wanted to say, because I don’t really think like she does, but frustration, absolutely. It’s easy to tap into.”
Veep is notorious for its profanity. I asked veteran actor Kevin Dunn on the red carpet  if he finds himself now swearing more in his regular life.
“It’s only enhanced my swearing capabilities,” he told me. “Some of the writers that they got me are just very succinct.”
I asked Dunn how challenging the dialogue was. The ensemble has a rhythm in the way they riff and speak, often over each other, and I wondered if that was hard to master.
“It was kind of terrifying, but we just developed a way (of acting) and with the writers and Armando and Dave, we were just like a machine because we were always together so much and the whole trip of the show and what people always would say, ‘Oh, you guys were brilliant, you can do so much improvising.’ No, this show was written but what one of the things Julia insisted on was making it dirty so while we rehearsed and while we sat and it was always making it, you have to be able to know what the scene was about and hear everything; it was all about dirtying it up. So we’d switch lines, we’d throw things around, we’d cut each other off, you know, just at the right point so you could hear what’s going on and it was a beautiful dance.”
About Louis-Dreyfus, he said she was a hands-on executive producer.
“I would be shooting a scene with Gary or with Matt and Tony and she’d be watching on the monitor and saying, ‘It’s not dirty enough, it’s not dirty enough.’ Okay, great. I mean, see? Her eye is, is all seeing and all know, really.”

On the red carpet Gary Cole explained what Louis-Dreyfus meant by dirty enough.

“Not dirtier in terms of profane. I think that what that term refers to, especially when there’s large groups in a scene, we want it to seem as if everybody is mashing together, stepping over each other’s lines, and so that it has a feeling of, that’s very chaotic, even though you have to find whatever script is there, and it is scripted. So that’s what she’s referring to.”

What was the last day of shooting the series like?

“It was very emotional,” Cole said. “I actually worked the very last day, I didn’t do the very last scene, but I worked the very last day of filming. You know, a lot of things flood, the whole eight years, or seven years, kind of floods back through your head. You have memories of first being there, and not really knowing anybody, and doing read-throughs of early scripts and wondering if you’re doing it right or doing it at all. And then you just have a lot of memories flood through and they were all positive. And you know that, you know, it’s television. Television ends, sooner or later.”
Celebrity guests at the screening and after party included Lena Dunhan, Kieran Culkin, Bryan Cranston, John Oliver and Al Franken.