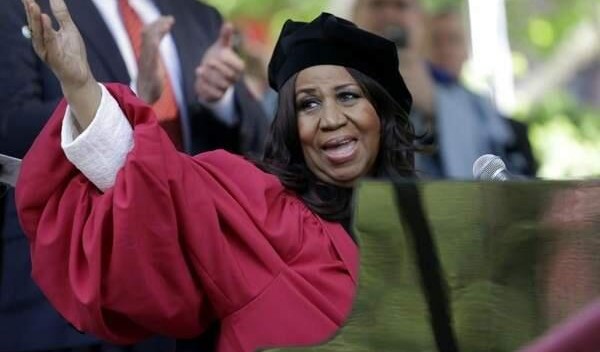 Today would have been Aretha Franklin’s 77th birthday. She passed away last August at age 76. Let’s celebrate her today. If you work for a radio station, please play her music. I wish everyone would play “Respect” today at noon, 9 Pacific time. That would be so cool.

Aretha loved birthdays and birthday parties. Every year she came to New York from Detroit– by her super coach bus– and celebrated in a big way. Her favorite spot was the big lobby bar at what is now known as the Ritz Carlton on Central Park South (formerly the St. Moritz). She would fill the space with music– the Dizzy Gillespie All Stars were a regular feature.

She also loved having new entertainers, which is how Kris Bowers– who this past year scored “Green Book” — met us. Aretha discovered him. A couple of years ago, R&B great Dennis Edwards, of the Temptations, came and sang his classic hit “Don’t Look Any Further.” Aretha had always had a crush on him, he knew it, and they really loved each other.

So many friends would come in from Detroit to the Ritz Carlton, and we got to meet them all. She was always accompanied by her best friends, including Willie Wilkerson, whom she loved dearly. But the room was also filled with celebrities from Al Sharpton or John Lewis to Clive Davis and his posse of friends, Berry Gordy, Quincy Jones, “The Wiz” choreographer George Faison (who one year staged an amazing dance performance for her), songwriter Valerie Simpson, plus Billy Bennett (whose wife was her long time manager Ruth Bowen), publicist Gwendolyn Quinn, and so on. Aretha’s dear friend and sometime publicist Tracey Jordan (who has a real, “big job” as my mother would say, at Sirius XM) would help supply a fabulous cake. A few years ago, everyone received a spectacular piece of pastry in the shape of a Grammy Award. You know, Aretha had 18 Grammys.

I think about Aretha every day. She really enjoyed Broadway shows, even though we were never on time for them. She would love the Temptations show “Ain’t Too Proud” that just opened last week. She was in the unique position of living in Detroit but being the only musician who wasn’t signed to Motown. She knew all their stars, they were close friends growing up. I know she was singing along to those songs on opening night, from heaven.

Last year was the first that there was no Aretha birthday party at the Ritz, and I could feel the absence. Tonight will be hard, but we’ll raise a glass. I think I will have a ginger ale with vanilla ice cream, the drink she got for all of us a couple of years ago at Mohegan Sun casino. “Have you tried this, Roger? Mmmm mmmm mmmm,” she said. It was her 75th birthday, she’d just performed in their arena to a sold out crowd, and served lemon cake with icing to 200 fans in the front rows. As usual, she gave us a gift.