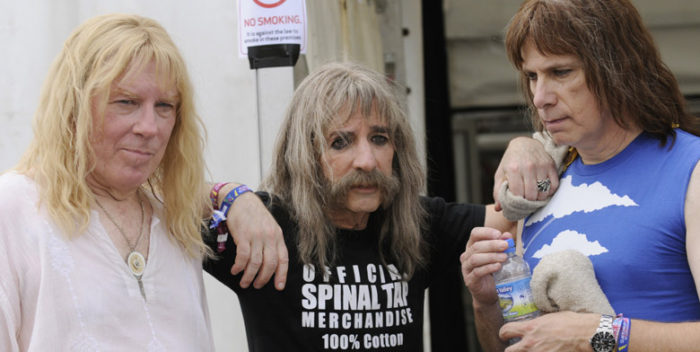 I am so there. Saturday, April 27th at the Beacon Theater– the Tribeca Film Festival will have a 35th anniversary showing of “This is Spinal Tap” followed by a performance from the group. Buy tickets now because this is the event of the week! Maybe they’ll lower a mini-Stonehenge onto the stage!

Tribeca just announced a bunch of great events to go with that one. The closing night film on May 4th is Danny Boyle’s Beatles movie, “Yesterday,” written by Richard Curtis. This is about a guy who wakes up to discover the Beatles never existed. He’s the only one who knows their songs, and starts playing them. Of course, he becomes a wild sensation. Himesh Patel from “Eastenders” is the star, and Lily James is his girlfriend. The amazing Kate McKinnon becomes his American agent. Doesn’t this sound like a big hit? I hope it is. Great use of the Beatles catalog!

There’s also a new restored cut of “Apocalypse Now,” a “Reality Bites” premiere, and a documentary about Trey Attanasio from Phish with a live performance.