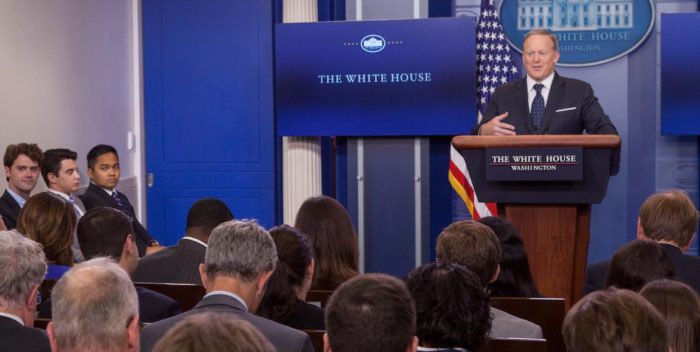 Stick a fork in “Extra.” If I were Mario Lopez, I’d be updating my resume fast.

Last December the Warner Bros. distributed syndicated celebrity show was forced to move from NBC O&O stations to ones owned by Fox TV– still a part of the Murdoch empire. NBC, according to reports, was not going to renew “Extra” after 24 years.

The full transfer of “Extra”  from NBC to Fox won’t take place until September 2019. But the effects of the move are already happening.

The show just announced that they’ve added disgraced former Trump press secretary Sean Spicer– mocked so well on “SNL” by Melissa McCarthy that she won an Emmy Award for her portrayal of the sniveling liar.

Spicer’s mandate– to “humanize” the various members of the Trump administration like Kellyanne Conyway and Mike Pompeo. (Yes, this is really happening.)

“Extra” will start showing these pieces this week. Last night the focus was on Pompeo. Tonight it’s on Conway. Tomorrow it’s on Sarah “Huckster” Sanders. By next week we may see Stephen Miller with puppies, and Paul Manafort live from prison teaching murderers to read.

The whole thing reeks of propaganda. Recently, Billy Bush– who lost his job on “Access Hollywood” thanks to Trump, was recently rumored to be joining “Extra.” Now that the show is with Fox TV, this makes sense. Could Trump have instigated the Fox deal with “Extra,” and pushing it to help him through the 2020 campaign? Why not?

In one report I read this week in the NY Post about the Spicer interviews, there was a slap at Mario Lopez for being “lazy.” A good natured guy, Lopez deserves better. My guess is he’ll be ousted or walk soon before the September takeover. “Extra,” which has always been benign viewing, now must be looked at as part of the Murdoch-Fox-Trump media conspiracy.