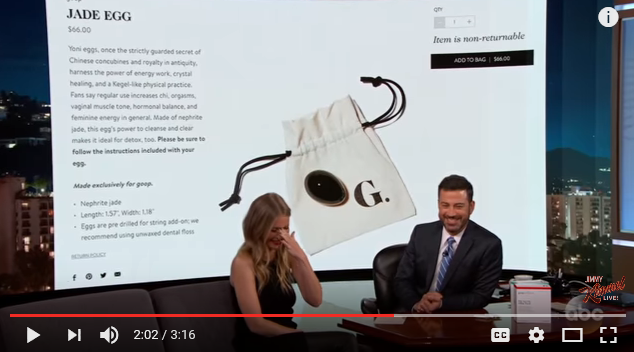 Is it Goop or gulp?

But the truth is, Marvel is leaving Paltrow. After “Endgame,” there will be no use for her Pepper, ground or otherwise. Robert Downey Jr.’s Tony Stark aka Iron Man, is already a pile of dust thanks to Thanos. Even if he’s revived in some way, RDJ– the reason Pepper exists– is gone, too.

Paltrow getting the jump on this news, or at least using it to her advantage, is why she’s been able to become such a smart businesswoman with Goop. But the real news of this article is that she’s basically retired from acting. She actually retired a long time ago, The Marvel movies were just extended cameos. Paltrow hasn’t actually been in a move since 2011’s “Contagion.” Her run of good movies came between 1998 and 2005. After that, you could see her interest deteriorated.

I always thought that after “Shakespeare in Love” won her an Oscar in 1999, Paltrow would go on to a string of Oscar nominated performances, and maybe some work on Broadway, a Tony Award. But this was not to be. The other actresses from her year, 1999, went on to big things. Cate Blanchett, who was nominated for “Elizabeth,” went on to two Oscars.  Another actress, named Meryl Streep, is said to have been very successful. So has Emily Watson. Fernanda Montenegro, star of “Central Station,” has never stopped working. She turned 89 last October.

But Paltrow became more interested in vaginal eggs and other expensive potions. According to the Variety article, she doesn’t even watch the new movies she’s sent and knows almost nothing of this year’s Oscar race. Extraordinary when you think about it. So much effort was put into her acting career as it launched.