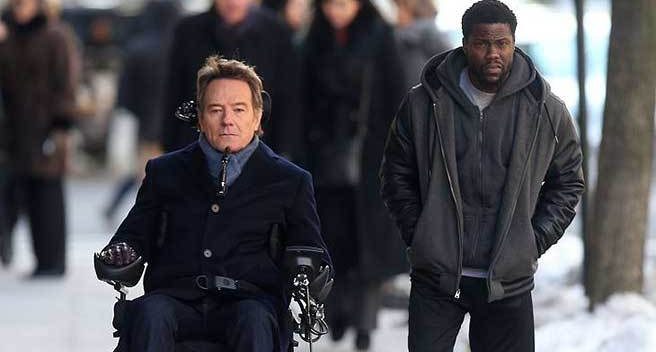 There’s a big upside for “The Upside” and a little bit of a downside.

The current movie was Harvey Weinstein’s idea. He bought and released the great French film, “The Intouchables,” released it and retained the US rights. The movie was a big hit in 2011 although France did not submit it as a foreign film entry to the Academy Awards.

Making “The Intouchables” into a US movie was all Weinstein talked about. And he did it. He hired director Neil Burger, oversaw the casting of Bryan Cranston and Kevin Hart, even persuaded Nicole Kidman to take a small, supporting role.

At the 2017 Toronto Film Festival, “The Upside” had a huge opening at Roy Thomson Hall. Weinstein declared there would be an Oscar qualifying run in December followed by a February 2018 opening. In fact, “The Upside” went over so well it took the sting out of another premiere Harvey had at that festival, the lamentably confused “The Current War,” which failed to electrify the audience.

But about two and a half weeks later, Weinstein’s world came crashing down. He was accused of sexual misconduct, The Weinstein Company went belly up, and all release plans ended.

“The Upside” went into the company’s bankruptcy.

Now this movie that Harvey Weinstein shepherded is on its way to $100 million this week via STK Films. If “The Upside” had remained a Weinstein Company movie, it would have been their 6th highest ranked behind “Django Unchained,” “The King’s Speech,” “Silver Linings Playbook,” “Inglorious Basterds,” and “The Butler.” It was what Harvey had always been aiming for– a big commercial studio type comedy with broad appeal. An arbiter of good taste, he’d bought “The Artist,” won a lot of Oscars for it, and still made no money. “The Upside” would have been a lovely vindication for him.

Weinstein’s personal behavior may have been reprehensible, but no one knew quality movies like he did. All those Oscar nominations and wins were not a fluke. Those movies stand up to this day including and most importantly “Shakespeare in Love,” which won a bunch of Oscars 20 years ago.