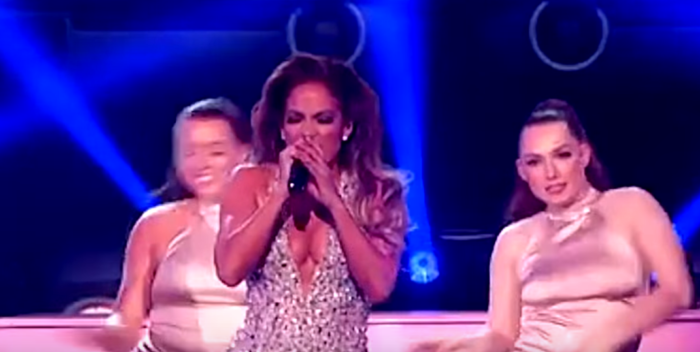 That was the story this past Tuesday when I bought tickets to the Motown 60 special taped by the Grammys for CBS. Broadcast is set for April.

On the rundown for the special, which had highs and lows, there was one notable inclusion: Jennifer Lopez’s hideous six minute medley of Motown songs she performed on the Grammys. During the taping they didn’t play the clip, but it was on the official run down. It was also mentioned on stage during a break.

On Grammy night when she performed this grotesqueness there were complaints that Lopez isn’t black, and was never signed to Motown. But it’s worse than that: she can dance, but she can’t sing. She lip-synchs through the disaster. They’re either using a pre-record with back up singers or someone else entirely. Look at the clip below.

No one questions that JLo can dance like crazy. But singer? Her real voice is thin and unpleasant. I remember years ago talking to Ashanti’s mother about how it was her daughter’s voice on “I’m Real” with Ja Rule. There must be squadrons of Ashanti-types since then.

The Motown special, the more I’ve thought about it, was a train wreck. Real Motown veteran stars like Mary Wilson of the Supremes and Otis Williams of the Temptations were left in the audience, never identified. It was humiliating. Duke Fakir, the last of the Four Tops, had been in town all weekend (he went to Clive Davis’s party) but wasn’t invited to the Motown show. As I wrote the other day, no Jacksons were there; Michael was particularly erased from the show. There was no Gladys Knight. Many others were missing.

I do hope Ken Ehrlich has so much good material that he doesn’t include the JLo spectacle. Here it is, to review. Oy vey.