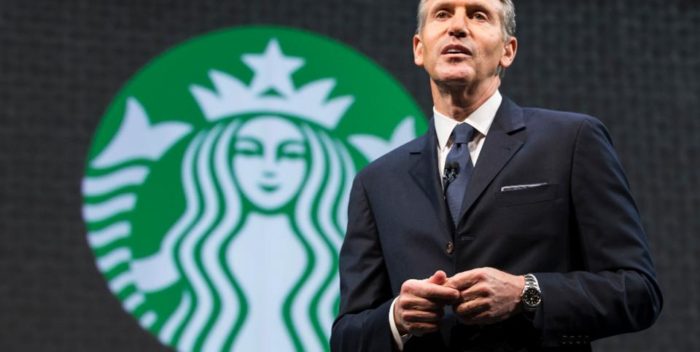 Now that Starbucks owner Howard Schultz has declared his intentions to run for president, his past is about to come rolling out.

First up: journalist Tom Robbins tweeted out today that Schultz used to play cards with mobsters in Canarsie in the early 80s. The story was in Robbins’ and Jerry Capeci’s 2013 book, “Mob Boss.” Robbins says Schultz declined to answer questions about this episode. The Bruno Howard Schultz used to hang out with was Bruno Facciola, an Italian-American mobster in the Lucchese crime family from Bensonhurst, Brooklyn, who worked under Capo Paul Vario. He was the brother of Gambino crime family mob associate Louis Facciolo. He was a hit man, and I don’t mean in the record business. He was executed by a fellow mobster in 1990.

And so it begins. Will Schultz’s ego about running for president lead to lots of unfortunate revelations? What do you think?

Now that Starbucks tycoon Howard Schultz is on the presidential hustings we’re eager to hear about his days hanging out at the Canarsie social club of late Luchese wiseguy Bruno Facciola. When we asked for our book “Mob Boss,” he clammed up on us. Am sure now he’ll tell all. pic.twitter.com/gVb1zUOYX4