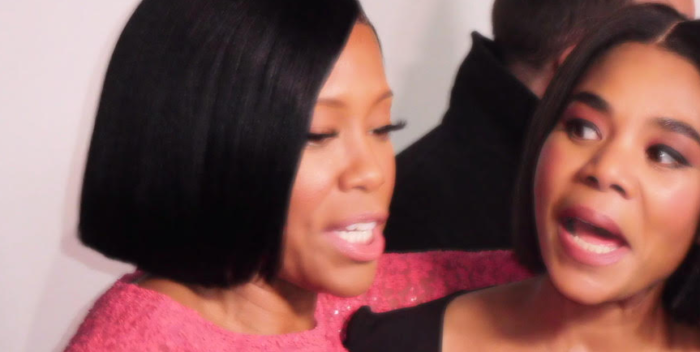 Regina King, who just flew in from the Globes looked refreshed and beautiful as if she’d slept 12 hours instead of partying. The New York Critics awarded her  best supporting honors for “If Beale Street Could Talk,” and Regina Hall was named best actress for “Support the Girls.”

King said later in the evening when receiving her award, “So great that the Reginas are here, with the hairdos the same.”  (They each had straight bobs.)

While picking up her award, which looks like a high school diploma, she thanked the critics and asked, “This is an award, right? I can take it home. It can fit in my suitcase? ’cause I’m leaving for Atlanta to work right after this, so thank you for allowing me to have an award that I actually get to take with me.”

The NYFCC announced their winners in November, so the ceremony is stress free, and a celebration of films the Golden Globes didn’t have sense enough to honor. Like the Globes it’s a boozy affair but since it’s not televised, as the liquor flows tongues loosen and the speeches are usually raucous and full of expletives. This year was a little more muted.

Making nice with the critics it’s what it’s about Pawel Pawlikowski reminded me on the red carpet. “It’s always good to have the critics on your side.” His film, “Cold War” received the Best Foreign Language Film honor and he had just jetted in from LA and the Globes, where his film picked up the same prize.

This year’s presenters were an impressive group of A-listers.
The evening kicked off with a ten-minute intro by Martin Scorsese, who presented Paul Schrader with the best screenplay award for “First Reformed.” Scorsese reminisced about working with his friend and collaborator on “Taxi Driver” and “Raging Bull,” and noted Schrader’s five-decade career, and his many films, including, “American Gigolo,” to the extraordinary film “Mishima,” to “Planet Earth,” and “Light Sleeper.”

Said Scorsese, “Each picture was immaculately crafted. Each one was surprising, often shocking. The time the shocks have not disappointed.”

Chris Rock presented Bo Burnham with the award for Best First Film for “Eighth Grade.” (Burnham directed Rock’s first Netflix special last year.) Before the intro Rock got in a little Oscar host advice: “Steve Martin should host the Oscars. You’re not getting me.”

Burnham quipped when picking up his award, “I always knew Chris would open for me, one day.”

He added, “New York Film Critic Circle. If you had asked me year ago to imagine the most terrifying string of five words possible, I would have said, ‘Mom started a group chat’ but a close second would have been New York Film Critic Circle. Every part of that phrase intimidated me…. Movies portray New York as a microcosm of all that America has been and can be. Movies portray Boston as a place where Matt Damon does math. …So New York intimidated me, film critic intimated me because I’m a sensitive boy who made this brand new film and don’t get me started on circles… For a movie of our scale reviews are life and death and you gave our movie life, you really truly put butts in the seats.”

Steve Martin, a longtime-friend of Richard E. Grant, presented the actor with the best supporting honor for “Can You Ever Forgive Me?” Martin got laughs by reading excerpts from correspondence he alleged his pal sent him over the years. (He was so funny he demonstrated, if he’ll do it again, that he’d be the perfect Oscar host.)

“Thank you very, very much, Steve Martin. Fuck!” said Martin, complaining about what a hard act Martin was to follow. He then cracked, “Tonight is especially exciting for me because when I was a little kid, I used to get all dressed up and play New York Film Critics Circle.”

Andrew Rannells, in presenting the best actress award to Regina Hall, managed to get in a plug for their new show. “I was very fortunate that I got to spend the last few months working with Regina on ‘Black Monday’ which airs on January 20th on Showtime.…best leading actress; which by the way is the first time a black woman has ever won this award.”

Thanking the New York Film Critics Circle, the actor said: “This is an amazing night for me. My mother gave birth to me when she was 18 in Fort Worth, Texas, and one of those things that she hid from my father was her subscription to The New Yorker Magazine…When I was growing up, what she used to do was she would say of The New Yorker, whatever Pauline Kael reviewed, that was the movie we were supposed to go see. After we saw it, we would sit at the dinner table and read Pauline Kael’s review, of which we would often disagree with.”

Hawke said the negative review Kael gave his performance in 1989 of “Dead Poets Society,” enraged his mother, who complained, “The whole thing is wrapped in a gold bow like a bunch of bullshit.

He noted of Roger Ebert, “He’s the only critic that matters. I don’t understand this, but okay, at the Cannes Film Festival Roger Ebert gave me a toast as the most successful, the only successful American actor who has never killed anybody on screen.

I was about 30 years old and I knew that I was going to kill people. I knew, I did. I knew that there was no way it was going to last. I respected the attention, but I learned from Roger Ebert that it matters what we put into the world and I was extremely inspired by the critics of art.”

When the evening was over I saw a trio of somber-looking people approach Hawke and tell him that they were friends with the late Pauline Kael and they assured Hawke she held his work in high regard. Hawke graciously nodded but didn’t look bothered.

I had a moment with Alfonso Cuaron on the red carpet, who looked tired from Golden Globes partying. His film Roma picked up honors from the critics for Best Film, Directing and Cinematography. Since Roma is so personal I asked what he’d learned about himself making the film.

“I would need to sit in that sofa — he pointed to the couch against the wall —and you’ll need to take notes for a few months,” he said, collecting his thoughts. “It’s about my family and moments we shared collectively and with society and probably humanity. I don’t know if those wounds are healed but at lest now they are recognized.”

Anyone who’s seen the film will recall the strange sight in one scene of a room full of dog heads displayed on the wall. What’s that about I asked him?
“I used to sleep in that room as a kid,” Cuarón told me. “I never questioned it’s weird to see it, marble eyes on the dog…It was later on” I realized it was strange. “It was called room of the dogs,” he laughed.