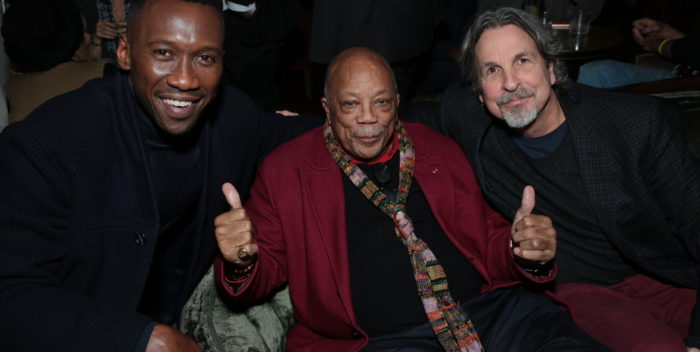 by Leah Sydney Music royalty Quincy Jones, 85, well knows about the triumphs and hardships of being a black man in the music business throughout some tumultuous times.  “Q” as his pals call him, held court this week at Ysabel in West Hollywood to celebrate director/writer Peter Farrelly’s crowd and critic pleasing “Green Book,” for a room filled with adoring awards voters as well as co-star Mahershala Ali and the mega talented composer of the film Kris Bowers.

Based on the true story of an Italian-American bouncer from the Bronx Tony Lip, (Viggo Mortenson) who is hired to drive a world class Black Pianist Dr. Don Shirley (Mahershala Ali) on a concert tour from Manhattan to the deep South.  Throughout this often perilous journey they encounter racism and frightening danger.  The result is that the duo forged a life long friendship filled with humor  and humanity.

Quincy explained why “Green Book,” hits so close to home for him.  “I had the pleasure of being acquainted with Don Shirley while I was working as an arranger in New York in the 50’s and he was without question one of America’s greatest pianists…as skilled a musician as Leonard Bernstein or Van Cliburn. So it’s wonderful that his story is finally being told and celebrated.   I did that “chitlin’ circuit” tour through the south when I was with the Lionel Hampton band, and let me tell you…it was no picnic.  And we were a band.”

Quincy continued: “I can’t imagine what it would have been like to do it alone with just a driver.  So Peter, thank you for telling this story of our country’s not so distant history, and capturing on film the ties that can bind us when we spend time listening, talking and living with one another. “Green Book” is a truly special film about friendship and the power of music to bring people together. Mahershala, you did an absolutely fantastic job playing him, and I think yours and Viggo’s performances will go down as one of the great friendships captured on film.”

King Quincy is right on of course.  Watch for “Green Book,” to keep the cavalcade of awards this spectacular film has already garnered  coming and rightly so.