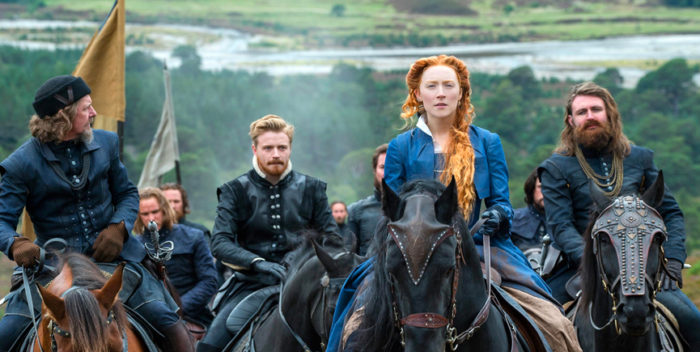 With their epic elegance, massive tempers and volcanic anger, Saorise Ronan — who plays Mary Queen of Scots —  and Margot Robbie, who plays her cousin Queen Elizabeth the First of England, square off in a protracted battle spanning decades to vie for their rightful place on the tumultuous throne in Focus Features, “Mary Queen of Scots.”

Mary is a Catholic and is a progressive out of place and ahead of her time.  Elizabeth is a tightly wound up Protestant who plays by the rules only when it suits her.  These powerhouse actresses do a royally rousing feminist take on this well known historical melodrama. Kudos to Beau Willimon (he created “House Of Cards”) for adapting John Guy’s novel “Queen Of Scots: The True Life of Mary Stuart,” and to director Josie Rourke for making a film that is not a typical stuffy, staid period piece.

Feminism and brutal politics show the parallel struggle of these two Queens and their fight for their respective rights to the throne.

The film begins with Mary who is about to be beheaded as she recounts the storied saga of how she got there.  Betrayal, deception, rebellion and death are the themes that run throughout. Mary seemed to have it all; beauty, marriage and her beloved baby James.  Elizabeth sacrificed it all to hang on to her tenuous power.  But beneath it all Mary’s marriage is in name only and she is surrounded by duplicitous sycophants which include her tricky husband Henry (Jack Lowden) and her tortured half brother the Earl of Moray (James McArdle)  Add to that the terrific David Tennant who plays the extremist religious leader John Knox.  As Elizabeth’s consigliere Guy Pearce gives a wonderful turn.

Elizabeth finally wins by ordering the death of her cousin who continued to be a threat to her own power. Ronan and Robbie simply shine in this dark drama that manages to create a new raucously savage way of telling an age old fascinating story of Mary and Elizabeth; two women trying to make their way in a world filled with treacherous men.

“Mary Queen of Scots,” is in limited release December 7th.  The actresses don’t seem to be in the Oscar race this year. But cinematographer John Mathieson and costumer Alexandra Byrne shouldn’t be overlooked. They’re working at the top of their game here.