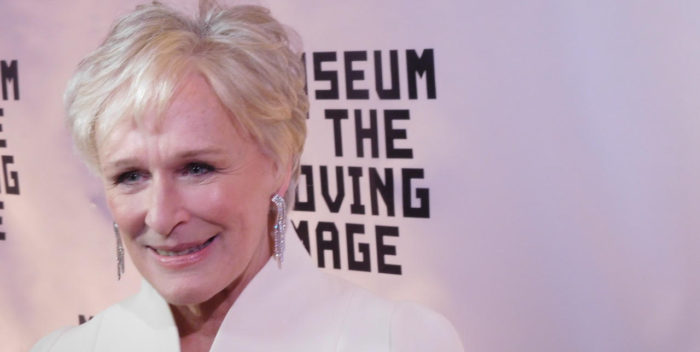 Glenn Close’s long and illustrious career — spanning 45 years and some 85 film roles and countless stage performances — was honored and celebrated by the Museum of the Moving Image last night at a gala tribute in Manhattan on the Upper East Side.

Featured speakers were Ethan Hawke, Christian Slater, Bob Balaban, Michael Barker and Jim Dale, who introduced clips from the actresses many films, including “The World According to Garp,” “Dangerous Liasons,” “The Big Chill,” “The Natural” and “The Wife.” Via video, accolades were flung by Michael Douglas, Kevin Kline, Rose Byrne, Bobby Cannavale and Tiffany Haddish.

Said Kline in his video, “Congratulations on this glorious event celebrating your wonderfully stunning, staggering, moving image — And finally ending up in a museum is absolutely appropriate.”

On the red carpet I asked Close, who looked spectacular in a sharp white pantsuit and cascading diamond earrings, how she found her way into her toughest characters?

“There’s always a period where you go, ‘I don’t know how I’m going to get into this character. And then if you’re lucky and you keep at it, and you know your craft, there comes a moment where you can find a common humanity in something in your imagination that feels right for that character. Some are harder than others.”

She found her way into the character of Joan Castleman in “The Wife” — a role sure to earn her the seventh Oscar nomination — by asking herself of the character, who has been writing her insufferable husband’s books, “Why didn’t she leave him?”

I asked Close to share her biggest professional challenge and how it influenced her career? “My first movie for sure.” That would be “The World According to Garp,” back in 1982. And the challenge? “The challenge was how to do it. My background was theater. Film is a very different energy with the camera. I thought I’d blow out the camera because I had an energy that was used to projecting and you had to bring it all in and that was a wonderful exercise.”

At the reminder that in that film she co-starred with the wonderful Robin Williams — improbably as his mother — she sighed before exiting the red carpet.

In her acceptance speech at the end of the evening, Close began by saying, “This is actually a very emotional event for me. Getting an award like this in the town where it started means a lot. Getting this award in the town where I walked into the Kaufman Studios, your neighbor and landlord I understand, and saw the set had been built early for us to rehearse on for ‘The World According to Garp.’ And I realized when I walked in, and when we were in the Kaufman, it wasn’t renovated. It was quite musty and fabulous and, but we walked into the set, and I realized, ‘This set exists because of my character. I’d better be good.’”

Close went on to add, “It’s humbling and, okay, kind of confusing, trying to figure out what to say when given an award like this. I don’t feel wise or particularly insightful. If anything, I feel more aware of the fragility of it all. As far as the choices that are the reason I’m here tonight, I think of something that Stephen Frears said at a big buzzy European press conference for “Dangerous Liaisons” all those years ago.”

“As accolades for the film were pouring in, Frears was the man of the moment and someone got up and started making some very intellectual observations about certain aspects of the film. I think the guy was French. Something like how he had so brilliantly mirrored the complexity of the relationships with his use of light and shadow, or maybe it was his use of the camera, and his choice close of closeups. Then this person concluded by asking Stephen how he’d done it, how he’d managed to get it right on so many levels. And Stephen pondered for a moment, and then said, ‘Well, it just seemed like a good idea at the time.’ And the fact that my very subjective choices that seemed like a good idea at the time have actually added up to a body of work that matters to people, is something I’ll never get used to.”

Closes spoke of moments “where one feels totally devoid of inspiration, and an entire crew is watching, and the minutes are ticking by, and the producers are looking at their watches, and a terrible panic starts grabbing you by the throat because you know you don’t have it, and you have no clue as to what it is and where it will come from. Moments that demand a simplicity of truth because that’s the only thing that connects, and without it you might as well get into another line of work.”

Close reminisced about George Roy Hill, who put her in her first film, “The World According to Garp.”

“When I went up to him I said, ‘I hope you’ll take care of me. I’ve heard that a lot of stage actors can’t make the transition into film.’ He said, ‘Yeah, you’re right, a lot of them can’t.'”

Close singled out stories of some of the many directors who helped her find inspiration for her roles, including, Adrian Lyne, “who thought of the pigeons in the window, and Michael and my greatest sex scene in the kitchen sink.”

Of Mike Nichols she said, “It happened when Jeremy Irons and I were flailing in the second act of Tom Stoppard’s ‘The Real Thing.’ Our director, the wondrous Mike Nichols, stopped the rehearsal, walked up to us, put his arms around our shoulders and whispered, ‘When you feel lost, drown in each other’s eyes.’”

Close thanked also her daughter Annie Starke, who plays the younger version of her character in “The Wife,” especially for her cleavage in “Dangerous Liaisons.” “My beloved daughter Annie who was seven weeks old when we arrived on the set of ‘Dangerous Liaisons,’ and the reason why I had such great boobs. She’s now 30, and a beautiful actress in her own right there.”

Close graciously thanked, it seemed, almost everyone who helped or contributed to her many movies, including producers, actors, directors publicist Kevin Huvane (who attended the gala), best friend Mary Beth Hurt, her make up artists, costume designers and wig maker.

Close concluded her speech by noting: “The most precious thing we have is time, and our lives are the sum of how we choose to spend it, and with whom. For me, the process, the process is everything. Choosing the projects that I can believe in, involving people who I can’t wait to spend time with, to play, to try to get it right. That is the ultimate luxury. To be given an award like this for something that already makes me so deeply happy and fulfilled is truly an embarrassment of riches.”