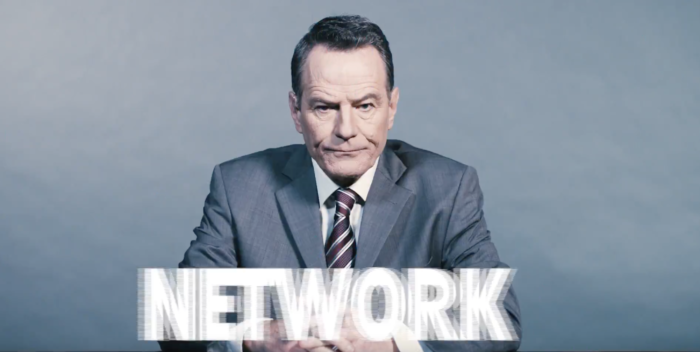 There’s a lot going on in Ivo van Hove’s “Network,” which opens tonight on Broadway after a hit run in London’s West End.

For one thing, Bryan Cranston– who won the Olivier award for Best Actor last March– is giving the performance of his life. It’s funny because I waited with him to meet Elaine May last month after she gave the performance of her life in “Waverly Gallery.” We had no idea, I guess (jokingly), what he really did for a job. Wow. His Howard Beale is just beyond sensational. (Everyone is good in this play: Tony Goldwyn, Tatiana Maslany, et al.)

At the end of “Network,” after the curtain call, there’s a little video tag on like a Marvel movie. von Hove shows in sequence all the US presidents taking the oath of office starting with Jimmy Carter. (The play takes place during Gerald Ford’s short administration.)

The audience, still standing last night, clapped for Carter, then Reagan, cheered for the newly departed George HW Bush, cheered for Clinton, clapped for George W. Bush, really cheered for Obama. Then Trump came up, and the booing boomed through the Belasco Theater. There were catcalls, shrieks, and one woman who yelled “Liar!” over the crowd. Only one man seemed displeased at Trump’s treatment, but he was drowned out.

I asked one of the ushers if last night was a typical reaction. “Oh yes,” she said, same thing. But another woman, visiting from Chicago, told me later Trump would have had a better reaction in the Windy City.