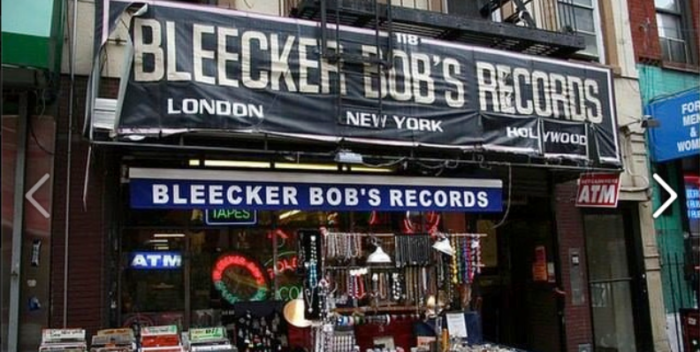 It’s a couple of days late, but I’m reporting to you that Bleecker Bob Plotnik died November 29th at age 75. If you lived in Greenwich Village in the late 1970s or cared about music at all from that era, you will know Bob’s name or the name of his record store. He — and it– were seminal in bringing New Wave, punk, power pop, whatever you want to call it to America.

Without him it’s unlikely there would be the Ramones, Elvis Costello, Talking Heads, New York Dolls, so many acts now so well established in the music firmament but 40 years ago just whispers from Melody Maker the NME.

There was a moment– there is always a moment– when it all happens. For me that was crystallized in 1978 when I came back to New York from Boston. CBGB’s and the Mudd Club were where you heard the music, but Bleecker Bob’s was where you held, felt it, saw it, listened to, bought it. The first shop I mostly missed, but the second one was on MacDougal and 8th, next to Reminscence. It was a long narrow store, where Bob held forth behind the counter, yelling at customers, making no friends, holding his mastiff by the leash.

Eventually the store moved to West 3rd St. and got wider, broader. But the idea was the same in all locales: dusty records, well aged plastic sleeves where you could dig into the most recent history of alternative music– the non Fleetwood Mac world, the rebel yell, dissonant sounds. By the time I got to MacDougal, Stiff Records had taken over, and the early early Virgin Records, and Rough Trade and so on. This is well before CDs or the idea of them. The records were singles, they came from England, they had not 45 rpm gaping hole that required a plastic insert, but a small hole like an album that played at 33 1/3. They were almost all imports, some colored vinyl.

I was in college. All you had was the New Musical Express to tell you what was coming, when it might come to New York. The guys behind the counter– Chris, John, Chris, and of course Bob– had some idea. “Come back, Monday. Or Thursday night.” I don’t know why but the Pretenders’ first single from the UK, “Stop Your Sobbing,” and Gary Numan, and the Jam, and “We Don’t Need Your Fascist Groove Thing” stick in my head. I remember tall Chris explicating his hate of electronic music: “I don’t like records where the band can walk away and the music is still playing.”

My Bleecker Bob’s life was probably five years at most. As CD’s came in, the mystery of records was over. Tower Records opened on Broadway and you could feel the pull. By the late 80s, the era of punk/NewWave music was pretty much over. Rap had moved in. But imagine that for those five or six years, from 1978 to 83 or 84 it had been an everyday thing, the learning, the adventure. Those records– when I first started listening, buying in ’77 no one would play them on the radio. We had one year in New York– magical 1979– when Meg Griffith and co. played them on WPIX FM. But established FM like WNEW wanted no part of the Clash circa “I Fought the Law” or even The Police singing “So Lonely.” They were playing “Rumours” over and over. I hated Fleetwood Mac.

Well, it was all because of Bob Plotnick, who made no friends, and wasn’t charming. Every conversation was more like a challenge. But he shaped change in the rock culture by force of will. Before Tower, Sam Goody and Crazy Eddie were his only competitors. And we disdained those purveyors of square, soft rock as easy listening.

So, life goes on and at some point we hear Bob has had a devastating stroke. A short documentary is made about him. I was only vaguely aware. And then two years ago I happened on him totally by accident, living in Amsterdam House, a nursing home facing the Cathedral of St. John the Divine. His devoted partner, Jennifer had managed to get him in there, she was taking care of him every day. When I first laid eyes on him, it was heartbreaking. I’m not sure he knew me; there was a flicker of recognition. He was already 73 and maybe 14 years into this horrid chapter.

It’s mind-blowing. Sirius XM has a channel called 1st Wave. There was no 1st Wave or Second Wave without Bleecker Bob’s. Thirty years later, thousands of pretend power pop punk whatever fake acts have come and gone. They stream or download, they’re on Sound Cloud. They’re mostly not good, or awful. They should build a shrine to Bleecker Bob Plotnick. Without him they never would have existed.