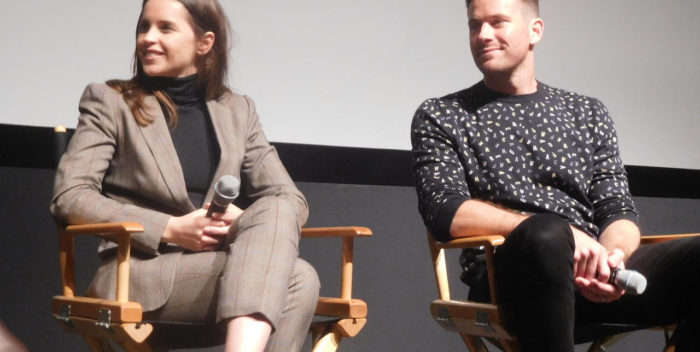 On the evening before Ruth Bader Ginsburg fractured her ribs and had lovers of justice everywhere praying for her speedy recovery, Felicity Jones and Armie Hammer coincidentally participated in a Q&A at the SVA Theater following a screening of “On the Basis of Sex,” their new film which focuses on the formative years of the judge’s career and marriage.

The spotlight in particular is on the one case — on gender discrimination — the Judge argued with her husband, Marty, an esteemed tax attorney and an adoring husband and ardent supporter to his wife. It’s a good courtroom drama that hinges on some tension at the end. The film is equally divided between the early uphill battle of Ginsburg’s career and a loving and inspiring portrait of the Ginsburg marriage.

Both Jones and Hammer have a terrific onscreen chemistry and give a winning performance although the one complaint is that their Jewish identity is downplayed, which is glaring particularly in the light of recent events, including the midterm elections. Imdb.com says Hammer has some Jewish ancestry although neither actor seems remotely Jewish. In the film it’s only fleetingly mentioned of Ginsburg that she’s Jewish and that’s in a disparaging remark by one of her Harvard professors. Ginsburg was one of very few women admitted in her Harvard class and one of the pleasures of the film are the several digs at Harvard for its disgraceful treatment of women. Ginsburg ended up receiving her degree from Columbia when she had to move to New York where her husband was treated for testicular cancer. (Marty died in 2010.)

“On the Basis of Sex” is directed by TV producer-director Mimi Leder, who is returning to the big screen — “The Peacemaker” and “Deep Impact” — from her more recent television hits like “The Leftovers.” The screenwriter is Daniel Stiepleman, RBG’s real-life nephew, who is making his feature screenwriting debut.

Of Stiepleman’s screenplay, Jones said, “He did an excellent job of portraying someone who obviously has such a high standing in the US Courts. But also he found all the nuances. He found – he obviously knows his aunt intimately, so he has access to her as a human being. And to all the moments that were really difficult, and when stuff didn’t go as planned, and constantly she was coming up against these obstacles. So, it was very much someone who was from a very modest background. So, the odds were constantly against her. And I always think of her and Marty, they were real fighters. They were constantly fighting in a situation that wasn’t always on their side.”

He was also moved by their relationship. “Especially Marty, being willing and able, and also so adept at defying gender norms. In the ’50s and ’70s, when this movie really takes place, you’d be really hard-pressed to find another guy who would be willing to stay home and cook and deal with the kids and all that. And it wasn’t a done thing, but he did it because he believed so much in Ruth. And also they existed with such symbiosis. You would have no Justice Ruth Bader Ginsburg without the support of her husband. And then you would have no “Party Marty”, as I like to call him.”

The idea to write the screenplay came to Stiepleman at Martin’s funeral. Said Hammer: “Someone got up to eulogize Martin and talked about the only case that they’d ever fought together. And he thought, “My god, That’s amazing. I would love to write this story.”

“So, he approached Ruth and he said, “You know, Aunt Ruth, I would really love to write this story. Because it seems like such an amazing story. Would you mind if I did that?” And she paused for a second and said, “Well, if that’s really how you want to spend your time, I guess.” The audience roared.

Both stars of the film met with RBG. So, what was it – what do you say when you meet Ruth Bader Ginsburg?
“Well, the first time we met her, she couldn’t take her eyes of Armie,” replied Jones to laughter.