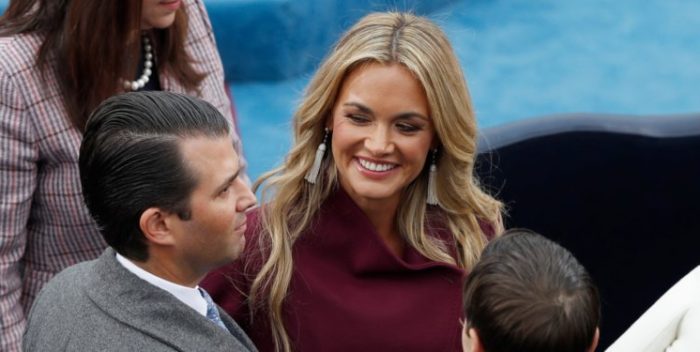 Vanessa Trump, she’s getting divorced from Donald Jr., is as bad as he is, don’t make a mistake. The wives are all complicit with the husbands in that family. She gave Axios.com a statement about the mail pipe bombs.
She had a really bad time, you see, when suspicious powder was mailed to her. It’s all about Vanessa, however, and Donnie Jr. Look at her message. She expresses no empathy for the 13 different recipients of the pipe bombs. She just wants you to know she had to take Cipro for two weeks! (God knows what Don Jr. had cured by accident.)
Here’s her self-serving quote to Axios:
Let me start by applauding law enforcement for swiftly catching one of the alleged perpetrators behind these recent acts of terrorism. I hope that he and anyone else who had any involvement in these grotesque attacks are prosecuted to the fullest extent of the law.
This is personal for me because I know firsthand what it is like to be targeted and terrorized by a coward with a vendetta. Back in February I opened an envelope intended for my husband Don, which covered my face, hands and clothing in white powder and left me terrified.
I was rushed to the hospital, evaluated and put on Cipro for the longest two weeks of my life, and while they worked to identify whether the white powder was deadly, I spent the entire time thinking about the horrifying possibility that I would never see my 5 beautiful children again.
It was a cowardly act against a mother. And even today, every time I open the mail, I feel the same fear in my heart as I did that day. These recent acts are the acts of a coward and nothing more than terrorism, pure and simple. No one, regardless of political party or ideology, should ever have to go through what I went through.
Yes, Vanessa, and? The words you forgot were– My heart goes out to the Clintons, the Obamas, the people at CNN, and everyone who must have been terrified when these packages arrived.
But…no…