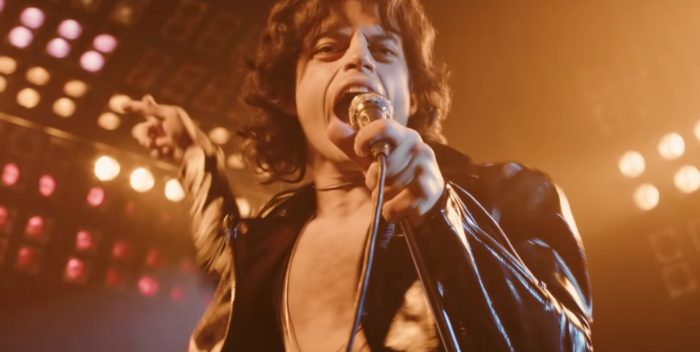 Update: Well, most people like Rami Malek as Freddie Mercury but very few have endorsed the movie. It’s got a 54 on Rotten Tomatoes, and I suspect it’s going to get worse. I’m told it played very well in its London premiere. Will negative reviews kill it? Or kill Rami’s awards chances? He’s quite good.

“Bohemian Rhapsody,” Bryan Singer’s story of the rock group Queen, and its star, Freddie Mercury, could not be more fun or more moving. If Freddie had to die, at least now he gets a proper send off. The recounting of the group’s rise to fame is a witty, silly, sad rollercoaster ride that never lets you go. And while you’re on it, the music is propulsive.

The main thing is that Rami Malek, looking sometimes like a young Mick Jagger, transforms into Farrokh Bulsara, born in Tanzania and destined to be Freddie Mercury, perfectly. Malek, star of “Mr. Robot,” is absorbed into the role. You never think once that it’s an imitation or trick. Malek’s performance is an immersion, much like Jamie Foxx in “Ray.” Malek has to be on Oscar lists in Best Actor. (That would be Malek, Gosling, Cooper, Mortensen at least.)

And to think, at one time Sacha Baron Cohen might have played Freddie. Others wanted a shot at it, too. But it turns out Malek grasps the bitchiness, the hubris, the camp, the style, the musical sensibility, and the pathos– there’s a lot of pathos. Because Freddie’s quick rise to fame culminates in his contracting AIDS at a time when it was a death sentence. You realize there could have been so much more.

What makes the film work, though, ultimately, is a terrific screenplay from Anthony McCarten. He drums around on the central theme of family. Farrokh knew his family didn’t understand him, so he sought out another one. The other members of Queen– Brian May, Roger Taylor, John Deacon–are not predictable choices. They’re straight, and straight arrows. But they accept Freddie for who he is, and ultimately none of them can live without each other.

You’d have to make a mini series to go through all the songs, what they meant, how they were written. McCarten is smart– he crystallizes them with a breakdown of the 6 minute “Bohemian Rhapsody” which is the template for Queen. In a nice twist, Mike Myers plays the record executive who doesn’t get that “BR” will be a monster hit. It was Myers, years later with “Wayne’s World,” who’d revive interest in the song for a new generation. He’s very good.

McCarten is also smart to give credit to the other bandmembers– Queen wasn’t a one man show. The actors who play them– Gwilym Lee, Ben Hardy, and Joseph Mazell0– are just right.  Lee is a standout as Brian May, whose sizzling lead guitar and songwriting kept Queen from becoming too outrageous. The band was Mercury’s ballast.

There are also lovely performances by Lucy Boynton as Mary Austin, the love of Freddie’s life (it was platonic but intense) and Allen Leech as Paul Prenter, Freddie’s lover and manager. (It’s a decided departure for Leech, known to many as Branson on “Downton Abbey.”) Tom Hollander has a smaller role as Queen’s manager, Jim Beach, nicknamed “Miami” Beach, their guiding light.

Not everything is right in the “Bohemian Rhapsody” time line. Freddie was diagnosed with AIDS in 1987. In the movie, he gets the news in 1985 before Live Aid, which is used as Queen’s comeback and Freddie’s seeming assertion that He. Will. Survive. Oh well. For dramatic purposes, McCarten has taken a lot of license, skipped some minute details. We will forgive him. Freddie will forgive him. It works for the movie, and this isn’t “Lincoln.” This is Queen.

In the end, like Queen was all about Freddie, “Bohemian Rhapsody” is all about Rami Malek. It’s funny. Rami, Brie Larson, and Lakeith Stanfield– all hot names now, Brie with an Oscar– all broke out in a very tiny 2013 film called “Short Term 12.”  “Short Term 12” didn’t even get an Independent Spirit Award nomination for Best Film (Larson and Malek were nominated, didn’t win.) The film didn’t even have a normal distributor– it was released by Cinedigm, which runs digital productions in movie theaters. Who would-a thunk it? Looking back, Cinedigm’s Chris McGurk was really prescient.