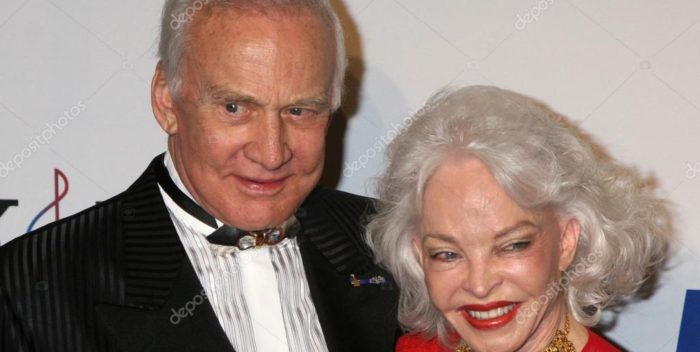 Just as “First Man” is opening on Friday comes news from its world: Lois Driggs Cannon Aldrin, the third wife of astronaut Buzz Aldrin, has passed away on October 3rd. Like Buzz, she was 88 years old.

Buzz was the second man to set foot on the moon after Neil Armstrong. He’s played in the movie by Corey Stoll. His first marriage, to the mother of his children, ended in 1974. Aldrin was married to another woman for three years, was single for a decade, and then married Lois. They were together for 23 years when they abruptly divorced.

But Lois’s influence on Buzz was pretty strong. He must have earned a lot of money during that period because when they divorced she got half of everything. I knew Lois, a lot of people did. She was a live wire, and got Buzz out in the world. They went everywhere, to many charity events and parties. They were usually lit like Christmas trees. They had a lot of fun. (I’ve no doubt Buzz’s kids didn’t like that.)

We were all on a shuttle bus once to a charity event for the Starkey Hearing Foundation in St. Paul, Minnesota. My friend Joyce remembers that as Lois set her foot on the pavement, yours truly quipped, “One step for man, one step for mankind.” Everyone laughed, even Lois. She liked a good time.

I’m moved by the news of her death, not because we were great friends, but because I knew she was a spitfire, a self-starter, and a survivor. She resonated. You can read all about her here. I’ll bet Buzz misses her a lot. She deserved to have her own, separate obituary. She was the kind of star you don’t hear about.