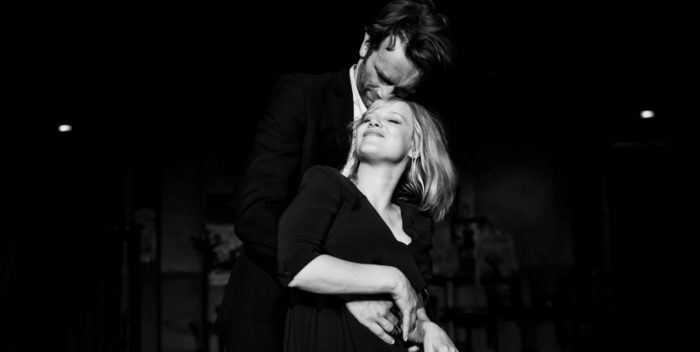 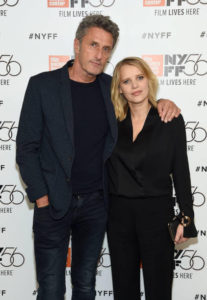 This may be premature — ‘Cold War’” is going to become a musical,” said Oscar-winning Polish director (“Ida”) Pawel Pawlikowski this past Sunday evening at Lincoln Ristorante. This was just before he introduced Joanna Kulig, the star of his new film. “Cold War” screened earlier in the evening across the street at the New York Film Festival to a packed house. Filmed in luminous black-and-white, “Cold War” packs a lot of drama, punch and heartache in its mere 84-minute running time. (Pawlikowski won best director prize for the film at Cannes.)

Standing before a grand piano at Lincoln, Kulig sang a bluesy French number and then a Polish folk tune a cappella. Kulig, who looks a little like French actress  Léa Seydoux, proved she sings as well in person as she does on screen.

“Cold War” is the story of star-crossed lovers Zula (Kulig) and Wiktor (Tomasz Kot) that begins in postwar Poland, spans a decade and moves over countries that include Yugoslavia, Berlin and Paris. There’s lots of glorious music and dancing, from Polish folk tunes to jazzy numbers, performed in places that range from smokey jazz joints to grand auditoriums.

Although Pawlikowski may have been joking, “Cold War” would make a great Broadway musical. Like nearly all 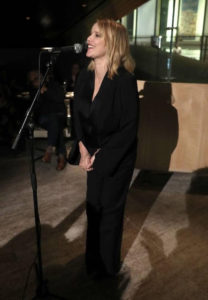 musicals it’s a stormy love story told through love songs. In fact Kulig, who’s as feisty and bold as her character Zula in the film, was angling for the leading role if it comes to Broadway. “Acting, singing in my own voice, dancing, this is what I like the best — musicals,” giggled the actress.

“Cold War” is a love letter to the director’s parents. He dedicated the film to them in the end credits and the story is loosely based on their tempestuous relationship.

How close did it mirror their story I asked him at the after party?

>“My father was a doctor and not a conductor as in the film. What was similar was he was ten years older than my mother and a more mature person at the beginning of their relationship. Then, when they met again in the West the roles were reversed. They did separate several times and married other people and then divorced them and then got back together again, abroad,” he laughed.

“Then they managed to quarrel again and so on, until they got too tired to fight. But this took 40 years, so it was a little bit more messy than this one (in the film.”

This must have been hard on him.

He shrugged. “At the same time they gave me a lot. I was the only child. It was dramatic, maybe traumatic, but at the same time they were really strong characters who gave me a lot separately. Now everything I know and feel about life is so much to do with their presences although I rebelled against them as a teenager. I was sick of their shenanigans,” he laughed.’

Did they see his success?
“Both died in ’89 just before the Wall came down,” he told me.  “They didn’t see the end of the Cold War strangely enough.”
Some comments from the director at the Q&A:
On the cinematography:
“The choice of black and white was largely because there was no good idea for color. Poland in the early 50’s wasn’t terribly rich in color and we wanted the film to feel colorful and dramatic. Black- and-white photography with a little contrast felt like a more interesting dynamic and way of doing it. But basically I had no idea of what colors to use because it was grey, Poland at the time and to come up with some kind of Soviet technicolor type of thing which existed would be pretentious and arbitrary and contrived.”
How the film did in Poland:
It opened two weeks ago and it’s a huge success in my estimation, I mean over 800,000 people saw it. It touched something.,, It’s not exactly totally accessible. It’s a very eccentric love story, very unusual. But a lot of people project themselves into and recognize something of their lives, plus it’s a rediscovery of folk music had something to do with it as well. The music had a big impact on audiences in Poland.
How the politics align with today:
“Cold War” has a lot of resonances today for sure. It’s set in Stalinist Poland, during a reign of terrors and every relationship was contaminated by the fact that you’re being observed, listened to and spied on. One wrong step and you’re out. … We haven’t got there yet but we have to keep an eye (on things).”
“We don’t know what’s going on at the moment you know? Not just in Poland, but everywhere. It’s a world in transition.