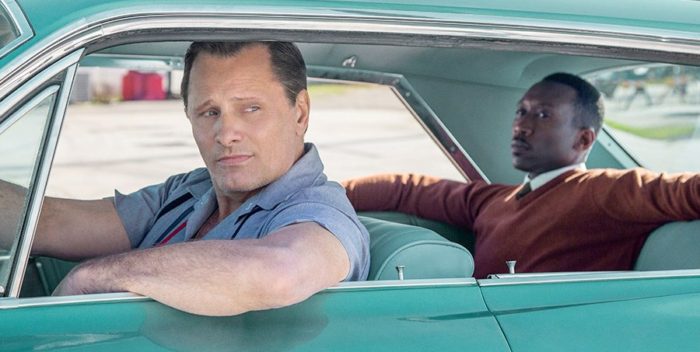 The self appointed Oscar prognosticators are out and about. They’re making their lists, checking them twice, even if they haven’t seen all the movies. It’s only October 9th.

But the Hamptons and New York Film Festivals have given me an opportunity to catch up with films I haven’t seen yet, and you will soon.

This is what we got:

“The Hate U Give” is already out, playing in select theaters. It’s an excellent film. The actor who jumps off the screen is Russell Hornsby as the father of the very fine Amandla Stenberg. It’s a performance that compares to Mahershala Ali‘s breakout in “Moonlight.” Hornsby must be nominated for Best Supporting Actor. He may even win. He’s dynamite.

Ironically, Mahershala Ali is back in Peter Farrelly’s “Green Book,” at the top of his game and gunning for another take at Best Supporting Actor. Ali plays jazz pianist Don Shirley, who in real life in 1961 needed a driver to take him through the South for a tour. The man who took the job was Tony Lip, the Bronx bouncer at the Copa who needed extra work. Viggo Mortensen is sensational as Tony, and will be nominated. He may win. I’m actually thinking he should, as the culmination of a career that includes “Eastern Promises,” “Captain Fantastic,” “A History of Violence,” the “Lord of the Rings” Movies, and so on. Viggo and Mahershala make one of the great all time teams. “Green Book” seems like a two hander because of them. Peter Farrelly has exceeded himself. No one will not love this movie. And it’s no “Bucket List”– no shmaltz.

Yesterday I wrote about Melissa McCarthy and Richard E. Grant in “Can You Ever Forgive Me? This duo also makes it all look easy. Lovely work. The same can be said of Viola Davis, for Steve McQueen‘s “Widows.” Talk about ‘how to get away with murder’! Davis leads a stunning ensemble including Cynthia Erivo, Michelle Rodriguez, Liam Neeson, and Elizabeth Debicki (not to forget Daniel Kaluuya and Colin Farrell). This is “Oceans 8.1.”

For weeks, the word “Roma” has been on everyone’s lips. Oscar winner Alfonso Cuaron has made a film about his childhood in Mexico City, recalling his nanny’s failed love affair, his father’s exit from the family, Mexican politics during his teen years. “Roma” is in Spanish, and black and white. It’s a masterpiece, on the same scale as Nadine Labiki‘s “Capernaum” and Florian von Donnersmarck‘s “Never Look Away.” Throw in “Cold War” (Poland) and “Border” (Sweden) and this is a landmark year for foreign films. These directors are working on a higher plane. It’s a very exciting year.

Paula Schwartz wrote a wonderful story about the “Roma” premiere. I will add that Cuaron throws in a meta moment in “Roma.” I’ll write about it tomorrow.

And yes, very importantly, there’s also “First Man” (Claire Foy, Claire Foy) and “A Star is Born,” the top players in the awards season this time around. They will each get multiple nominations, and are at the top of many lists for good reasons.