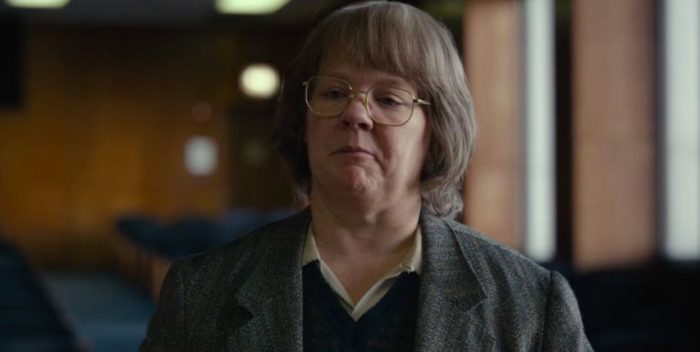 Melissa McCarthy is mostly known for comedy. Her breakthrough film was “Bridesmaids” and she starred for six seasons in CBS’s “Mike and Molly.”

But McCarthy’s turn in “St. Vincent” with Bill Murray showed that she had the drama chops,too.

Now she throws her hat in the ring for Best Actress in the dramedy “Can You Ever Forgive Me?” She plays Lee Israel, a real life New York writer who couldn’t make ends meet after one best seller. So she forged letters from famous writers like Dorothy Parker and Noel Coward, and sold them to Manhattan dealers for hundreds and thousands of dollars.

For a while in 1991 Israel pulled off the scam, and involved a pal named Jack Hawk, who helped her pull off the deception. Richard E. Grant plays Hawk and is just sensational.

Marielle Heller directed from a screenplay by the great Nicole Hofcener with playwright Jeff Whitty. Among the executive producers is actor Bob Balaban and producer Anne Carey (“20th Century Women”).

“Can You Ever Forgive Me?” premiered Sunday night at the Hamptons Film Festival, which has been a marathon of viewing potential Oscar movies and performances. McCarthy should be a slam dunk in Best Actress, joining Lady Gaga, Glenn Close, maybe Emma Stone (“The Favourite”), and some names yet to be viewed in their films including Saoirse Ronan, Margot Robbie and so on.

Grant is a no brainer in the best supporting actor category.

McCarthy is full of surprises in “Can You Ever Forgive Me.” She abandons all her comedy tics (which are hilarious– see her Emmy for playing Sean Spicer on “SNL”). She’s the real thing as Lee Israel, an engaging but difficult woman (she died in 2014) who was an repentant alcoholic and iconoclast. McCarthy’ performance is a tour de force, and not to be missed.

PS McCarthy might ask US if we can forgive her for “Happytime Murders.” After seeing this new movie, the answer is yes. All is forgiven. Please don’t do that again.