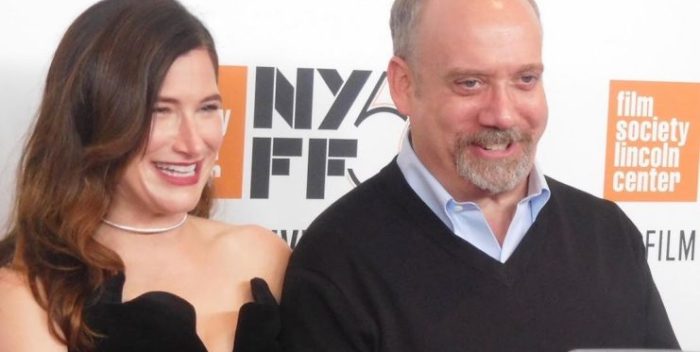 Tamara Jenkins’ new film “Private Life”  was such a long time coming after her beloved 2007 hit “Svages” that all kinds of interesting people turns up last night for the new New York Film Festival premiere. Kyra Sedgwick arrived on her own, sat up front, and even came by the after party at The Smith. Sofia Coppola came with a friend, and stayed til the end of the party. “Namesake” and “Queen of Katwe” director Mira Mair sang Jenkins’ praises. Jenkins has her fans, and they ardent. ( The film opens in 21 theaters on Friday and will be on Netflix simultaneously.)

“Private Life,” with Jenkins’ exquisite script and adroit direction, stars Kathryn Hahn (Rachel) and Paul Giamatti (Richard) as an artsy New York couple — together for decades — who are trying everything to have a baby after putting it off for maybe too long. (The characters are 41, and 47, respectively.)

On the red carpet Jenkins described the couple to me: “The characters are true New Yorkers of a specific kind of breed, and they’re hanging on Manhattan by the skin of their teeth, by their little finger nails to their rent stabilized apartments. They live in the East Village,” she said. “It all informs their behavior. It informs their life choices. I really wanted to get New York right.”

And Jenkins got it right. This is a story told with as much humor as heart, and describes in exhausting detail how this couple goes through the ringer to try every medical procedure available to conceive. Not exactly flush with cash — she’s a book writer and he has something to do with a small theater troupe — they’ve gone through most of their scratch and borrow from relatives.

After their latest attempt fails, their overly familiar doctor (a hilarious Denis O’Hare) suggests Richard and Rachel get a donor’s egg. Newly arrived on their doorstep after dropping out of college, their step-niece Sadie (a brilliant debut by Kayli Carter) is an answer to their dreams and cheerfully agrees to donate hers. Sadie’s mother, played by Molly Shannon, who has never been funnier or more touching on screen, hits the roof when she hears the news. “Fertility junkies” is how she describes Richard and Rachel in possibly the film’s funniest scene set at the family Thanksgiving dinner.

“Private Life” is loosely based on Jenkins’ own experiences getting pregnant. She and her husband, well-known screenwriter Jim Taylor (he’s collaborated on most of Alexander Payne’s films), had their own baby issues.

Jenkins told me on the red carpet, “It’s not memoir but I had my own fertility saga with my husband trying to get a baby when we were not young anymore, so the core understanding, the emotional experience of it, is mine. But the details are fiction.”

As for a decade since her last film? A questions Jenkins was asked over and over.

“I had a baby. That happened.”

She also never stopped writing, including a screenplay with her husband.

“It was a job but it went on forever. And then right at the end of that I remembered going being so restless and crazy and really desperate to write and it was the first time I wrote with a kid.” She had a two-bedroom and one bedroom had been her office so now with a child she rented an office, which focused her writing.

She hopes it won’t be a decade until her next film.

“I’d like to work faster. If I keep going ten years between each movie it’s going to get very complicated. A lot of equipment will be involved for me, so I’d like to pick up the pace.”

During the Q&A following the screening, Jenkins said she and her husband, like Rachel and Richard, forgot about trying to get pregnant the old fashioned way.

“Jim was injecting my ass just like the movie, peeling off estrogen patches, going to doctors’ appointments, and we went to the movies and the movie that happened to be playing was ‘Knocked Up.’ And we watched the movie, and it was shocking. People got drunk, they had sex, they woke up, they were pregnant. And we totally forgot about sex as an option. ‘Oh my God, people have sex to get pregnant!’” Jenkins said in mock horror. “I thought I needed an injection. And then when we were leaving the theater I said to Jim, ‘If we made a film what would ours be called?’ And I went Knocked Out.”

Jenkins noted that the movie is not primarily about having a baby.

“In terms of the writing, I always felt the movie was ultimately about the marriage anyway and not the baby, and Paul (Giamatti),  in the middle of making the movie at some point stopped, and said, ‘This is not about the baby, this is ‘Waiting for Godot’,’” said Jenkins. “The movie ultimately I think is about the existential struggle of co-existence.”