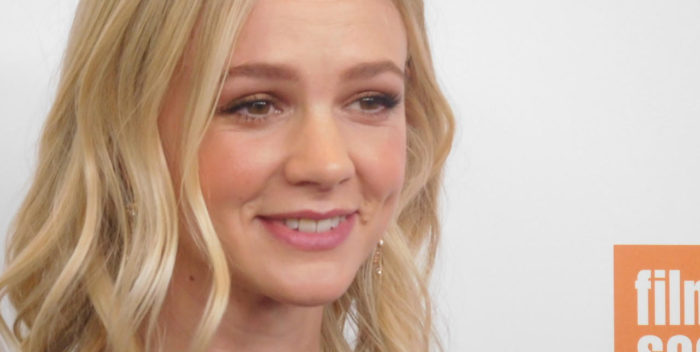 “Wildlife,” Paul Dano’s impressive directing debut, celebrated its New York premiere Sunday night at Alice Tully Hall as part of the New York Film Festival. It premiered at Sundance, and has since received rave reviews, including a 100 percent rating on Rotten Tomatoes. Adapted from Richard Ford’s 1990 novel, the movie is also Dano’s writing debut; he co-wrote it with actor-writer Zoe Kazan, who is also his longtime partner. The film stars  Jake Gyllenhaal, Carey Mulligan and young Australian actor Ed Oxenbould. Both Mulligan and Gyllenhaal attended the NYFF screening. (The film opens in theaters October 19.)
The slow burn of a film is about Jeannette and Jerry Brinson, a young couple who move to small-town Montana in 1960 with their 14-year-old son Joe in search of the American dream. Things start to sour when the affable Jerry loses his job at the private golf club where he works for being too close and personal with the members. Jerry takes a low-paying job fighting the raging fires in the Montana hills, leaving behind an embattled wife who changes from perfect housewife to wage earner and survivor in the short period he’s gone. Sadly their teenage son becomes the dismayed witness to the disintegration of his parent’s marriage.
The movie is a beautifully acted and written period piece that recreates the spirit and tone of the book. In the Q&A following the New York premiere Sunday evening, Dano said what drew him to the book, which he first read in 2011, was its “lean, clear and simple prose,” which he and Kazan have recreated for the film.
It’s mainly Jeannette’s story. Jeannette is a fighter, a doer, persistent, college educated. But she’s stuck with a husband, no matter how handsome and affable, who is not her equal in intelligence or drive. She’s living paycheck to paycheck and disappointment in life has finally taken its toll. Displaying all the nuances and changes Jeannette undergoes, often just seen in the silent closeups of her face, Mulligan gives a performance as Oscar-worthy as the one she gave in “An Education,” which first got her noticed in 2009.
(Special kudos should also go to production designer Akin McKenzie and cinematographer Diego Garcia for their beautifully detailed tableaux of postwar American life in a small Western town.)
One interesting aspect of the book that’s mirrored in the film is that neither are judgmental of their characters. Mulligan told me on the red carpet that was an appealing aspect of the role. “We are often expecting the female characters, most particularly the maternal characters on our screens, to represent our ideals of what mothers and women should be, and I think that means a sort of sanitized idea of motherhood on screen and what I love about this is you see is a mother really struggling and not a perfect mom and making lots of mistakes, and making quite serious mistakes. But that doesn’t define her character and that hopefully as an audience they will still be empathizing with her and hoping for her to be all right.”
photo c2018 Showbiz411 by Paula Schwartz