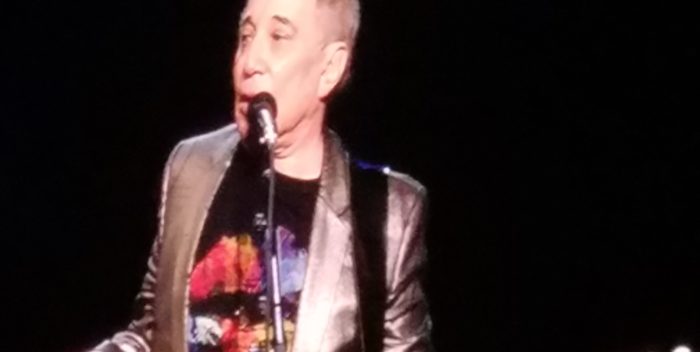 I saw The Who retire a few times, beginning in the late 70s. They’re still playing somewhere. I think Bernie Williams retired from the Yankees three times.

Tonight, Paul Simon played the first of what he says are his three last dates on tour ever. This one was at Madison Square Garden. He didn’t look or seem sick. There was nothing in his demeanor to suggest that the end was near. Art Garfunkel was nowhere in sight. Simon didn’t play a retrospective evening. Indeed, he included a number of songs from very recent albums. The show was not that different than the one I saw in Forest Hills a couple of summers ago.

What’s going on? Who knows? A bid for attention? A hook by which to sell tickets?

Simon looks extremely refreshed. I mean, extremely. He’s 76, he was fit as a fiddle, has a very straight jawline and glistening cheeks. He looks like he’s ready for an overseas tour. Two more shows? Huh?

He announced this was his 101st show at Madison Square Garden. (“Tell Billy,” he joked about Billy Joel.) He mixed up a nearly three hour show with some Simon & Garfunkel, and a lot of solo numbers. “Bridger Over Troubled Water” was relegated to the middle, done in a new arrangement. He gave a nice shout out to Aretha Franklin, who had a hit with it. There was nary a mention of Art Garfunkel, who is not participating in this weekend’s faretheewell.

Simon says he may do some traveling now that he has time on his hands. (It’s not like we stopped him from going anywhere.) He said he will continue to compose music. My guess is, he’s back in two years, bored as hell.

Just for the record, he has nothing to prove. Before Billy or Bruce, he was New York’s pop poet laureate. (Dylan belongs to Hibbing, Minnesota). Simon’s songs just grow deeper as the years go. His “American Tune,” written in 1973 about Nixon and Watergate the absymal state of American politics, the death of 60s optimism, rings truer today.

The audience — which filled 2/3 of the Garden, a third of the seats weren’t sold– sang along to “The Boxer.” Lai-la-lai.  “The Sound of Silence” echoed in our ears.

Paul Simon had better stick around in some form, that’s all I’m saying. I handed out Blimpie’s menus in the fall of 1975 to make enough money to see him at DAR Constitution Hall. Forty three years later, I have no regrets.