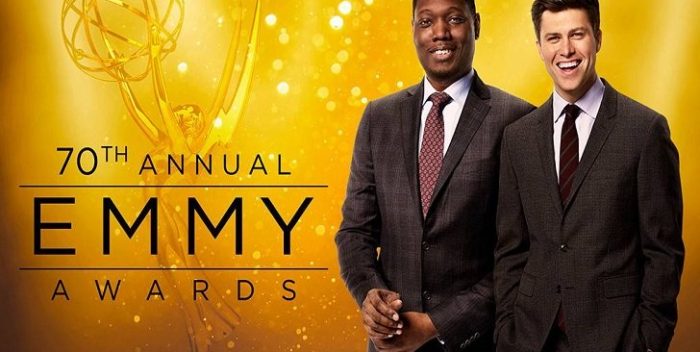 Me? I love “Saturday Night Live,” Colin Jost and Michael Che, even Fred Armisen and Maya Rudolph. I could listen to them snark all night. But let’s not forget that “SNL” is aka the Not Ready for Prime Time Players. They are after hours comedians, for the hip and the clique-ish. They are not the mainstream audience.

And so last night, like the last several Emmy shows, was a disaster ratings wise. No one who watches TV is watching this show. TV ratings come from “The Big Bang Theory” and “NCIS.” But the Emmys have become the Cable ACE Awards. Only two shows– “Blackish” and “This is US”– were even involved in last night’s Emmys. The rest came from cable other subscription platforms.

On top of that, the whole show– which I thought was funny and clever in spots, and I was sitting there– was a diatribe. I couldn’t imagine the TV audience giving a hoot about what was going on. And they didn’t. Only 10  million watched the first hour– which was the best hour by far with comedy awards. By 11pm there 7.74 million people. That means 2.3 million gave up before the drama awards and the two big finales.

And there were some strange things. Even though I admired the Aretha Franklin tribute, she wasn’t a TV star. And John McCain? John McCain from his prisoner days? What was he doing in the In Memoriam? That particularly wreaked of Harvard Lampoon silliness– let’s sneak John McCain in to embarrass Donald Trump (again, I loathe Trump so that’s not the point).

Well, you reap what you sow. No one at the TV Academy listens. More than the Motion Picture Academy, the Emmys need a Most Popular Something. And they need to feature the actors and actresses who bring in viewers every week– from Mark Harmon to Mariska Hargitay.