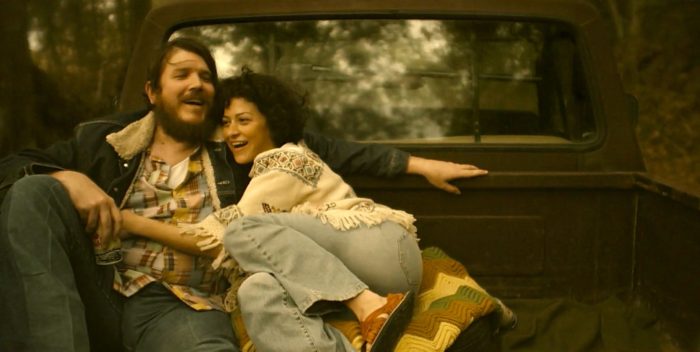 Ethan Hawke is a man for all seasons– actor, director, writer. He’s got a couple of well earned Oscar nominations, too. I’m always interested in what he’s up to, and now he’s made his masterpiece. “Blaze,” a complex, beautifully wrought sort of down and dirty version of “Crazy Hearts,” opens locally this week and nationwide next week. You don’t want to miss it.

Hawke directed and co-wrote with Sybil Rosen, a nice Jewish girl from the South who 30 years ago hooked up with an unknown genius country-blues star named Blaze Foley. It’s no spoiler that Foley died in 1989 at age 39 but because we never really knew him on a national level, his story unwinds as a riveting character study. He’s the guy who didn’t make it, but left behind the legend. A little better known was his comrade in arms, Townes van Zandt, who also died young (1997, age 52) but not before recording up a storm.

Rosen essentially was a Joyce Johnson, Jack Kerouac’s girlfriend who went on to become a famed writer and editor. Rosen wrote a memoir, published in 2008, of her time with these guys, called “Living in the Woods in a Tree: Remembering Blaze Foley.” Ethan Hawke was smart enough to make it into a movie. It’s only taken a decade. The cost is under $2 million. It looks like ten times that at least thanks to cinematographer Steve Cosens. Everyone’s going to want to know how he and Hawke did it.

The actors are newcomers and novices. Ben Dickey, who won a special prize at Sundance, makes an astonishing debut as Blaze, a Charles Bukowski-esque larger than life country blues man way way way ahead of his time– of everyone’s time. Everyone’s going to be asking about Foley now, and Dickey may have some answers. He will wipe you out.

Another wonderful debut comes from Charlie Sexton as heroin-addicted Townes van Zandt. Sexton could be Sam Shepard’s younger brother or Harry Dean Stanton’s son. I have no doubt he will get a couple of Best Supporting Actor nods out of this from the Gotham and Indie Spirits (if the latter can let go of their Oscars wannabe addiction). Sexton is a well known veteran musician who’s toured a lot with Bob Dylan and David Bowie in years past. Watch out for him.  Alia Shawkat, granddaughter of the late journeyman TV actor Paul Burke, also makes an impressive turn as Rosen herself. Josh Hamilton, always an MVP, is their steadfast sidekick.

But it also comes down to Hawke, who just “got” this. Lightning has struck. The chemistry was right. The screenplay fully explores each character and gives depth to people who are not so easy to access on the face of it. Sometimes I wondered if they were living in 1980s Austin or 1930s dust bowl, they are so isolated from the go-go world of Reagan yuppies. But they lived on their own grid, and Hawke has electrified it. So nice to see some real cinema. Again, find this movie, because ads won’t be obvious.