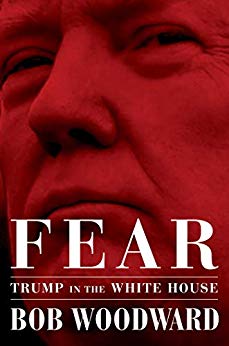 Tuesday was a crazy day in almost every respect thanks to the Senate Judiciary Committee.

But the bigger news is that Bob Woodward’s evisceration of the Trump White House, called “Fear,” is number 1 on amazon in hardcover and Kindle a week before its publication.

The excerpts in the Washington Post, followed by Trump’s denunciation, and the revelation of the taped phone call between Woodward and Trump– all of it has sent the book soaring in pre-sales.

Release date isn’t until next Tuesday.

Woodward’s book comes on the heels of Michael Wolff’s bestselling “Fire and Fury”– which will return as a paperback in January with new information and updated revelations after the mid term elections.

Since then we’ve also had the Omarosa and Sean Spicer books– each flops after brief sales flares. But “Fear” is going to be the big one, and its publication will likely have consequences we can’t even predict. So hold on!