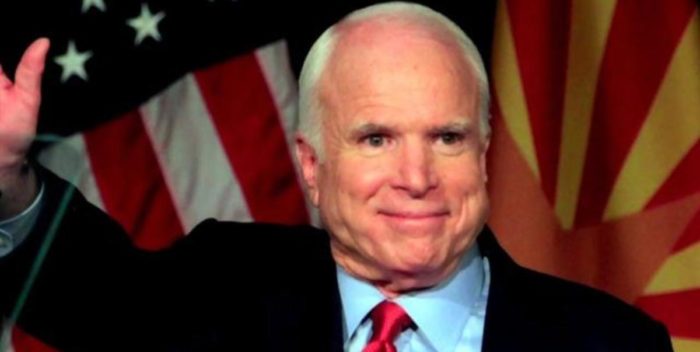 Senator John S. McCain of Arizona has died of brain cancer. He was 81. His family had announced yesterday that he was stopping treatment, and that his time was coming to an end.

Now we wait for a statement from Donald Trump who is unbelievably president of the United States. Trump has mocked McCain for being kidnapped and taken prisoner during the Vietnam War. McCain got his revenge by voting against ending Obamacare. He became a hero all over again.

McCain made pretty much only one mistake in his long and stellar career in politics: he let Sarah Palin run as his vice presidential candidate. She absolutely cost him any chance of winning, and became a standard bearer for national stupidity.

Otherwise, McCain was a moderate Republican who loved his country and put it first. What a week– Aretha Franklin and John McCain. We’re losing the best people.

UPDATE Here’s Trump’s Tweet, written by someone in the White House and totally impersonal.

My deepest sympathies and respect go out to the family of Senator John McCain. Our hearts and prayers are with you!