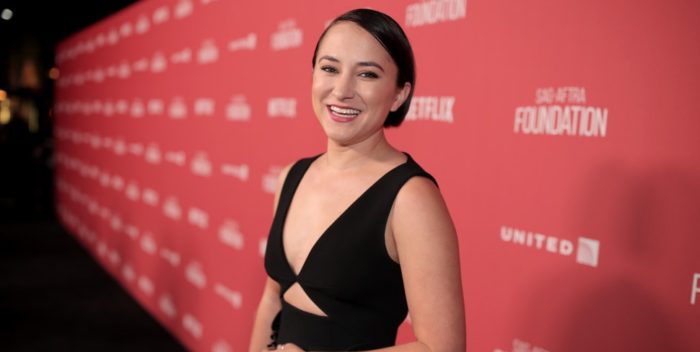 Zelda Williams, daughter of the late comic genius Robin Williams and his popular ex-wife Marcia Garces Williams, is over the moon. A TV pilot she made on her own called “Shrimp” has been accepted into the Tribeca TV Festival set for late September here in New York. Zelda is doing the hardest thing of all– making her way in Hollywood on her own, with the spirit of her dad helping but maybe sometimes hindering, too. This news is a big deal.

The festival describes “Shrimp” as  a “comedy/drama about the equal parts strange and mundane daily lives of the women of professional dominance. Contrary to popular belief, professional dominatrices don’t sleep with their clients, but that doesn’t mean that their job is any easier to explain to the ‘vanilla’ world. While they’re hired to make the wealthy and powerful feel anything but, out of latex and away from work they’re stuck navigating the same shit as the rest of us as they struggle to figure out just what the hell a normal life even is, let alone how to live one.”

Hey it sounds a little raunchy, but cool. Zelda is cool! Many congrats!

Well, folks, the news is finally out! My little latex covered baby got accepted into the second ever @tribeca TV Festival! For those who don’t know, SHRIMP is a pitch pilot I created, wrote, directed and acted in about the daily lives of professional dominatrices, and can I just add, STOP TELLING PEOPLE THEY CAN’T/SHOULDN’T DO IT ALL, because I had a hand in absolutely every aspect of this and it was INCREDIBLE. This whole thing was such a labor of love from so many people, originally stemming from an idea I pursued and researched years ago, to a script that was a short, then a pilot, then somewhere in between. It’s been so many things to me, but as yet it’s not been seen by many of you, so I cant wait to finally show it to the world at long last!
🦐
I’m honestly still kinda in shock, but I’m so thrilled for SHRIMP to be a part of the #TribecaTVFestival, and hope anyone on that side of this pale blue dot come hang with us opening night! Tickets are on sale now, link in bio (I think… though my call time was 4:30 this morning, so if Im wrong, I blame my sleeplessness).
Thank you, from the bottom of my bitch goddess heart to all the wonderful, powerful women who trusted in me to take care of their stories and them on this set, and all the incredible humans who helped me do so in making this seemingly wacky idea an actual independent reality.
The last photo in this set is me crying like a baby after the last shot of SHRIMP, so overwhelmed by the gratitude I felt to be surrounded by so many great people that I think I got snot all over @conorleslie. It was one if the great joys of my life thus far to make this, and I can’t wait to continue creating for, and about, the people who inspire me.
ONWARDS!