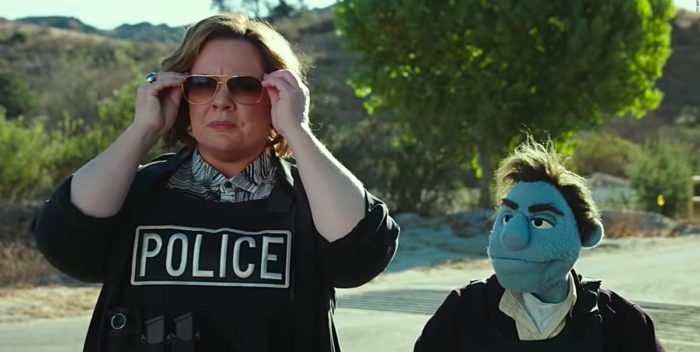 Brian Henson, son of the acclaimed Muppets creator Jim, created ‘Henson Alternative,’ a subgroup which focuses on ‘adult puppet comedy,’ and this film certainly lives up to company’s tagline, ‘No Sesame.  All Street.’  Brian directed and co-wrote along with Todd Berger.

Melissa McCarthy stars and with her expert  comic timing she creates real chemistry with her blue puppet partner Phil Philips (Bill Barretta).  Ex-Puppet cop Phil, screwed up during an incident in the line of duty while trying to protect his now estranged ex- partner Connie Edwards (Melissa McCarthy.) Phil now has his own business protecting puppets from blackmail, with his loyal and in love with him but he’s clueless about that,  human secretary Bubbles who is played wonderfully by Maya Rudolph.

When Phil’s beloved brother Larry Shenanigans, an actor on the popular puppet show, “The Happytime Gang,” dies under mysterious circumstances, Phil is forced to find his murderer and to stubbornly team up with Edwards to solve the crime.  More of the “Happytime” cast gets murdered, and Phil and Connie find themselves as suspects. Edward’s bosses get in the mix, a funny Joel McHale, who plays FBI Agent Campbell, and Lieutenant Banning, (Leslie David Baker).

Time is ticking for the duo, as they have to solve the crime before more people are targets as well as themselves.  The always terrific Elizabeth Banks is in the mix as well.  Ok, so the scenes of an ejaculating puppet, various puppet sex and S/M scenes, a hilarious take off of the famous Sharon Stone crossing leg scene in “Basic Instinct,” well it’s all there.  “The Happytime Murders,” is  an outrageous and gross hodgepodge, the film knows exactly what it is, and you’ll be laughing, mostly, throughout.