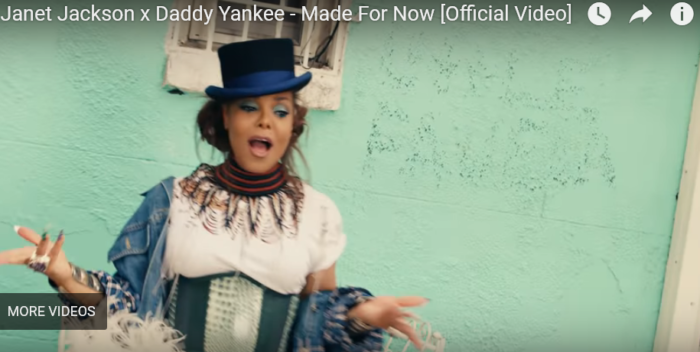 Janet Jackson has her first top 10 hit since 2001 with “Made for Now,” a collaboration with Daddy Yankee.

The record is great, but the response comes straight from an over the top knock out performance on the “Tonight” show on Friday. That, plus the video for the song, has made it number 4 on iTunes, competing with the new Ariana Grande single and the avalanche of sales for Aretha Franklin’s singles.

Janet’s last actual hit was in 2001. That was “Someone to Call My Lover” with Jermaine Dupri. I know, you’re thinking, it can’t be so long ago. But after that Janet’s recording career became a mess. Her last two singles didn’t even chart. And before that, “No Sleeep,” with too many e’s, made it just to number 63.

So what happened? I’ll tell you: “Made for Now” is an actual song, with a chorus that’s conventional, understandable, and singable. Also, the video is ebullient, euphoric, and triumphant. It’s reminiscent of “Smooth.” It’s joyous. Director Dasve Meyer captured some magic, and it’s infectious.

Janet isn’t even on a conventional record label anymore. She released “Made for Now” on her own Rhythm Nation records, distributed by indie group Cinq Records. She’s had 8 million views on YouTube for the video proper. I’ve added the Tonight show clip after that. Janet is back, kids. I’d say this would be the year for the Rock and Roll Hall of Fame to do the right thing.

One PS: In all those years, Janet never stopped trying. She lived through Michael’s death, her own waning popularity, poor ticket sales, a bad marriage, her crazy family. Persistence– and talent– have paid off.