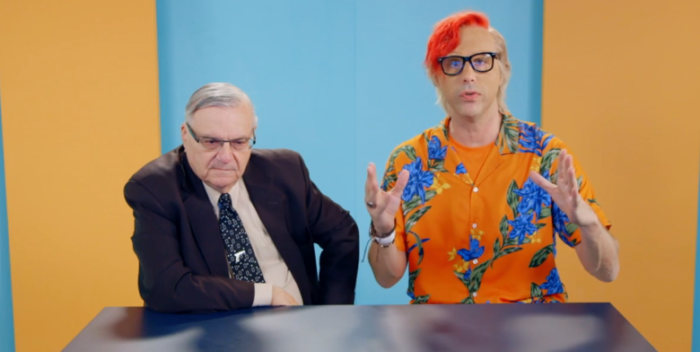 Sacha Baron Cohen’s “Who is America?” has settled into a weekly average number of viewers: 300,000. This week it was 313K, last week a little under, etc. It’s never more than that. He’s found his audience. They are loyal. But the show is in last place in its time slot on Sundays, beaten by everything else on cable.

It doesn’t seem to matter what the press is from the prior week. This week, SBC failed to get a local politician in Utah to fall for being called a pedophile.David Pyne, national director of the Utah Republican Assembly, turned out to be a smart cookie. He’s probably a bad guy but I liked him for smelling a rat.

The big get was Sheriff Joe Arpaio, who’s not exactly a member of Mensa to begin with. SBC just kept talking and talking until he’d convinced Joe to say he’d give Trump oral sex. Arpaio would have agreed to anything at that point. It was a lot of fun.

I like the show, and I’m watching it. So I’m one of the 300,000– although this week Spectrum couldn’t manage to provide Showtime at 10pm. It was weird, but the main Showtime channel wouldn’t register. Spectrum is being booted from New York State for a good reason.

Showtime’s David Nevins said this week that the network wants more of “Who is America?” and why not? It’s cheap to produce. Nevins said he was on the fence about a show I really love called “I’m Dying Up Here” and said nothing about their best show, “Billions,” which should have been on HBO.