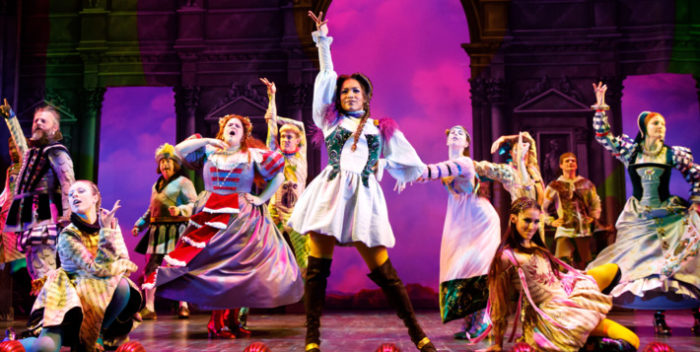 There isn’t much good to say about “Head Over Heels,” a show you will not see nor will many others once word spreads from last night’s opening.

A few years ago I happily reported that Donovan Leitch, a model-actor and son of the singer Donovan, and his pal Gwyneth Paltrow had optioned the music of the Go Go’s for a musical. It sounded like a fun idea. I thought they’d take the GoGo’s and groups like the B 52s and make a beach musical.

Why did I envision beach balls and so on?  The Go Gos only had a few hits, and they weren’t really written for a narrative spine to join them. One of them, “Our Lips Are Sealed,” came from an offshoot of The Specials, the famous UK ska group.

Well, somewhere along the way others stepped in and tried to build an adaptation a 16th century poem, “Arcadia,” around the songs. This could not be remotely in the same universe as the Go Go’s but no one says ‘no’ anymore.

“Head Over Heals” is “Springtime for Hitler.” I really thought at the end of Act 1 the producers would go over to Sardi’s, wait for the bad reviews, then keep the money they’d collected from the hundreds of bilked investors in the Hudson Theater.

Alas, there’s nothing as offensive as “Springtime for Hitler” in “Head Over Heels” but the show is an ungodly mess. I have no idea what its point was, what the heck was going on, or why anyone should care. Of the many performers, only Rachel York made sense as the Queen in what is essentially a trip to a Renaissance festival to see summer stock actors read corny lines.

I never say this, and I don’t want to cite anyone, but these are some of the worst voices I’ve ever heard on Broadway. Of the younger leads, Bonnie Milligan stood out, and Andrew Durand tried hard.

The audience was like a Halloween party in Greenwich Village, full of drag queens. Many guests took “festive” to mean over the top outrageous. There is, after all, a heavy theme of acceptance and gender non-bias in the story. That aspect was fun. In the audience, well known people included Anna Wintour (she runs Vogue magazine) and Gloria Steinem– not together. You knew things weren’t going well when the next to me, during Act 2, pulled out their phones and starting using them.

PS Only three of the GoGo’s showed for the opening. Belinda Carlisle has already seen it and headed back to her home in Bangkok (I didn’t know she lived here, don’t know why). The GoGo’s catalog is thin enough that the show had to be padded out by adding Belinda’s two solo hits– “Heaven” and “Mad About You.” Plus, the show had to license “Cool Jerk,” originally recorded by the Capitols, which I guess the Go-Go’s covered when, they, too ran out of material. PSS If anyone’s interested, I have the original single of “We Got the Beat” on Stiff Records– much better than the one that came out on A&M.