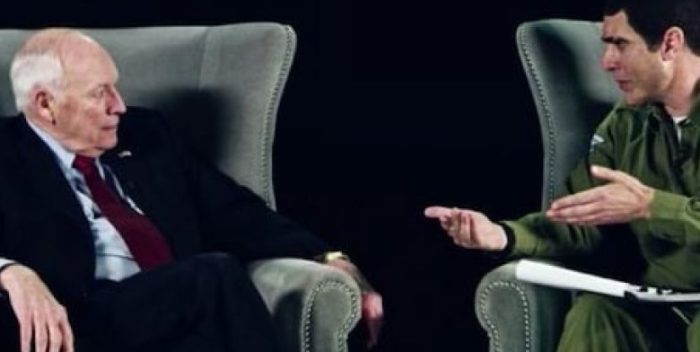 Showtime insists that “Who is America” is a hit because last week ratings went up through the week thanks to delayed viewing.

But what’s happening is that no one is coming to the show at its appointed time. That’s because Showtime does not advance publicity for it. The publicity comes after the show airs. Then curiosity seekers stream it or seek it out on Showtime on Demand.

The reality is, no one’s making it appointment viewing.

Meantime, Cohen’s second episode was another half hour of duping stupid people into doing or saying idiotic things. A George State Rep– who’s obviously an idiot– was conned into such an embarrassing segment that his career is now over. He repeatedly said the N word, then cut the penis off a black life sized doll. But he was a bad guy anyway.

In Arizona, a group of small town people showed their innate racism and ugliness. I said it was like shooting fish in a barrel. But almost everyone I know disagreed and said the people deserved to be outed as horrible racists.

A “Bachelorette” contestant was revealed as an idiot, too. Who cares?

Dick Cheney– now that, I’m into. Cheney withstood a barrage of “Bush” and “Dick” jokes. Cohen’s character asked him about his infamous hunting accident. That was funny. Cheney is evil, so go for it.

Showtime says Episode 1 instigated a record number of sign ups for their service, by the way. I’m sure it did. But this is running just like “Twin Peaks” last summer– low ratings on the Sunday followed up latecomers during the week. “Twin Peaks” also had no previews.