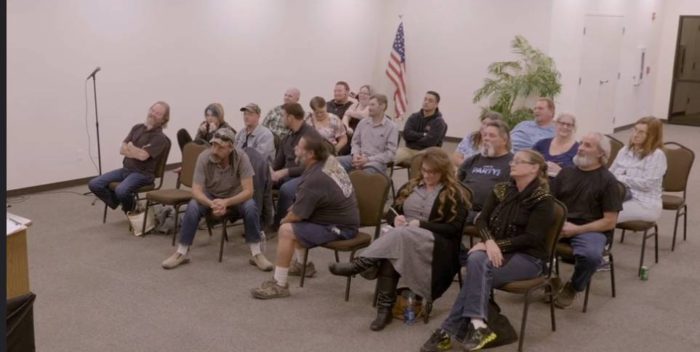 I felt bad for the people of Kingman, Arizona who were duped in episode 2 of Sacha Baron Cohen’s Showtime series, “Who is America?” They didn’t ask for the show to come and embarrass them. Somehow Cohen got a group of these rural rubes to come to a presentation in which Cohen’s heavily made up character told them they were going to get a $385 million mosque.

Look, the people are racists. They don’t have teeth. They admit to tolerating the black people in their town. But isn’t this shooting fish in a barrel? Don’t we know this already? Their spewing of hate is nothing new. Arizona wouldn’t allow the MLK Holiday at first. Rather than Muslims coming in, Cohen should have asked about Mexicans and immigration. Much more on point.

In this episode, Cohen tries to dupe journalist Ted Koppel, who won’t be had. Cohen does make mince meat of Dick Cheney, an old stupid war monger who is not relevant to what’s happening today. Cheney is so 2005.

Cohen is very funny, I do laugh at his stuff, but I also wonder: what is being accomplished here? A huge effort is being made to humiliate really sad people. He savages a Georgia state rep, gets him to pull down his pants and say terrible things. But the guy is already so pathetic, what’s the point? On top of that, Cohen money or a tax break from the Georgia Film Commission. Their logo comes at the end of the show. I’m sure they’re thrilled.

There’s also a lot of time spent setting up and savaging a “Bachelorette” contestant, Corinne Olympios. This girl has an IQ of 7. Why pick on her? Funny? Yes. But if “Who is America” is largely getting stupid people to read inane scripts, what’s the point there? I’m sure you could get her to read the ingredients on dog food.

Yes, it’s all fun. But in the current political climate, “Who is America?” is not helpful.