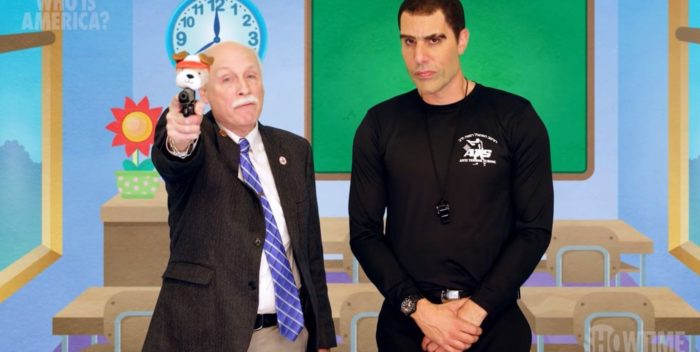 Showtime didn’t do much to promote Sacha Baron Cohen‘s new show “Who is America?” And it shows. Just 327,000 people watched it on Sunday night.

The only real publicity the show had was on the Drudge Report, of all places. But there was no premiere, no screenings, no build up. Showtime relied on outrage and word of mouth. It didn’t work.

The show that followed, Stephen Colbert’s “Our Cartoon President,” had 186,000 viewers. I watched it, and loved it. But I had no idea what it was when it came on. I guess no one else did, too.

What is the Showtime strategy? They just don’t care about publicity or press. I don’t get it.

Cohen was trounced at 10pm.  “Mexico Life” was among the shows on cable that did five or six times the business. (1.9 million viewers). Something called “On the Case with PZ” on Discovery had 1.5 million. “History of Comedy” on CNN had 764K. That’s twice as many as Cohen’s show.

“Who is America?” should be appealing to the “Borat” and “Ali G” audience, as well as a young, hip demo. But Showtime can’t seem to reach these people. This happened last year with “Twin Peaks.” It was ignored. And “Billions,” one of the best shows on TV or cable, has equally low ratings and no love from the Emmy Awards. Frustrating!

Why wasn’t “Who is America?” on HBO? That’s what I’d like to know. It’s perfect for them. Maybe the Time Warner-ATT Merger made it too hot…

UPDATE: Showtime says “Who is America?” actually was seen by over 1 million people when include all platforms including several showings that were streamed and beamed and telegraphed. But basically, “Who is America?” didn’t make the top 25 cable shows on Sunday night. It was a bust.