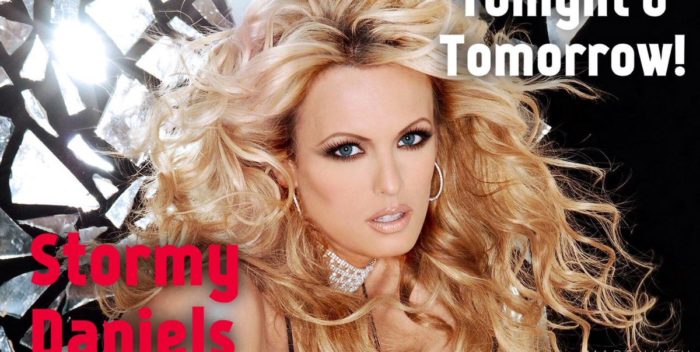 My client @StormyDaniels refuses to be intimidated. She will return to the scene of the “no crime” tonight in Columbus, Ohio as scheduled. She never ceases to impress! #Courage #Basta

Stormy Daniels will return to the same club tonight in Columbus, Ohio. Last night detectives who were at the Sirens Gentlemen’s Club said they observed Daniels remove her top and force patrons’ faces into her chest. She spent the night in jail but this morning charges were dropped. Now Stormy– and presumably Avenatti– will return for Part 2.

Saddened to hear the other 2 dancers arrested with me last night did not have their charges dropped. All tips from my stage performance tonight at Sirens in Columbus will go towards their legal fees. Come support the working women of this city. #letussurvive

The charges in Ohio against stripper and whistleblower Stormy Daniels have been dropped. Daniels was arrested overnight in Ohio because someone said she “touched” a viewer of her strip act. It was ridiculous and likely politically motivated since she is going to take down Donald Trump. Stormy’s intrepid lawyer, Michael Avenatti, posted this tweet a few minutes ago:

I am pleased to report that the charges against my client @stormydaniels have been dismissed in their entirety (below motion was just granted). I want to thank Joe Gibson & his colleagues at the prosecutors ofc for their professionalism starting with our first call early this am. pic.twitter.com/xHPSWsyqM2