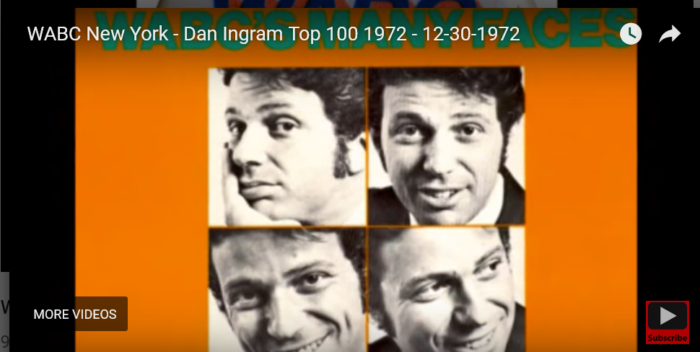 Dan Ingram is gone today, at age 83. He was my radio hero, mostly from 77 WABC AM, the greatest top 40 radio station ever, and WCBS FM from its heyday when it didn’t play crap from the 1980s.

Dan was irreverent but never a shock jock. He warmly undermined the status and cracked you up when you didn’t expect it. When “The First Time Ever I Saw Your Face” played, he inserted Joe Tex screaming “I Gotcha!” when Robert Flack arrived ponderously at “The first time ever I lay with you.” He was juvenile appropriate for a teen audience.

I got to know Dan in the 80s, after WABC was converted into right wing jabbering. He went to CBS FM with many of his great colleagues, now missed so much: Harry Harrison, Ron Lundy, Chuck Leonard, and so on. Cousin Brucie is still kickin’ it on Sirius. They were the championship team.

Dan ended every show with “Bye now, Kemosabe!” So it’s back at him, today, Bye, now Kemosabe! Thanks for everything!

Listening to these sound checks on YouTube from an era gone by, you can hear how much deejays shaped the popularity of what we call classic pop and rock. They hyped it. They loved it. They made it into something dramatic. There was a sense of occasion.