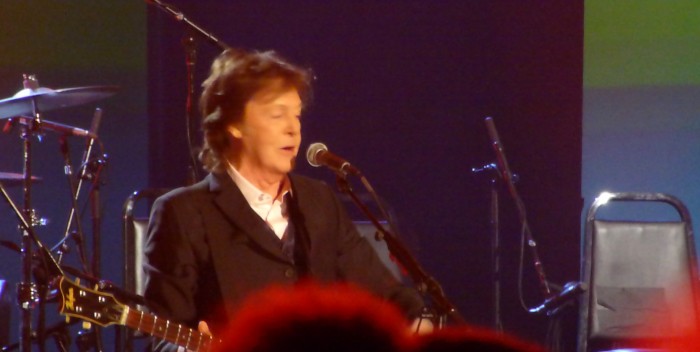 SATURDAY NIGHT UPDATE: “The White Album,” both the red and blue greatest hits albums, “Abbey Road” and “1” are on the iTunes top 100. “Hey Jude” has joined “Let it Be” and “Blackbird” on the top 100 singles.

EARLIER That was some great Paul McCartney special on Thursday night with James Corden.

What started out as a Carpool Karoake turned into a 30 minute documentary that was moving and elucidating about the Beatle.

The result is that Beatles records have jumped back onto the charts with a vengeance.

In the iTunes top 100 albums are now three Beatles volumes and one by McCartney. “Abbey Road,” “Greatest Hits 1962-66,” and the Beatles “1” album are all there. So is McCartney’s “All the Best.”

On the iTunes singles chart, “Let it Be” and “Blackbird,” two songs Paul sang with Corden, have arrived big time.

It’s the same on Amazon for the albums.

Why did McCartney do it? The Corden special kind of promotes his new album “Egypt Station,” which doesn’t release til September 7th. The “Yellow Submarine” 50th anniversary is coming in about three weeks. On the show, McCartney doesn’t sing any of his solo hits– it’s all Beatles.

Who knows? But a splendid time is had by all.