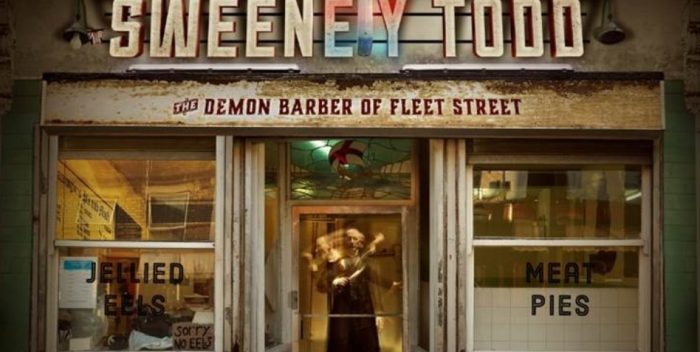 I would go back and see “Sweeney Todd” in its current incarnation every night if  I could. The version I saw recently (for the third time–different cast) takes place in the fictitious Harrington’s Bake Shop aka the Barrow Street Theater just off Seventh Avenue in Greenwich Village.

I went the first time because it was such an oddity–a British company bringing over a “Sweeney Todd” they’d performed in a tiny London bakeshop. Alas, that cast left after a few weeks, replaced by Norm Lewis and Carolee Carmello– Broadway superstars– to carry on as Sweeney and Mrs. Lovett.

I returned once again, principally to see Sally Ann Triplett from Sting’s “The Last Ship” and other shows, a younger Mrs. Lovett maybe, but intriguing. She’s joined by Thom Sesma, a lanky Todd, also younger, plus the reliably hilarious Stacie Bono playing the barber Pirelli and the beggar woman, aka Lucy Barker, and just five others: Michael James Leslie as Judge Turpin, Zachary Noah Piser as Tobias (with a lilting tenor he gets to sing “Not While I’m Around”), John Rapson (a young Beadle with a lovely voice), Billy Tighe as the lovestruck sailor Anthony (he gets to sing “Joanna”), and Delaney Westfall as a spunkier than usual but still clueless Joanna.

Just eight cast members- plus three amazing musicians who make Stephen Sondheim’s best and most complex score soar like they’re a symphony: Matt Aument on a stand up piano, Tomoko Akoboshi on violin, and Michael Breaux on clarinet.

Plus, for verisimilitude, you can come early and eat a delicious pie made not of priest or friar but meat, chicken, or vegetables. (It’s well worth it.)

“Sweeney Todd” was not a big hit when it opened in March 1979 on Broadway. Even though it won all the Tony Awards (Best Musical, score, Actress-Angela Lansbury, Actor-Len Cariou–the father on “Blue Bloods” now!), the show only lasted til June 1980 in that run. But aficionados and fanatics knew it was the best Sondheim show (which is saying a lot) and maybe the best score ever. Thirty eight years later, the demon barber of Fleet Street and his half crazed paramour baker Mrs. Lovett are legendary.

You can sit in the pie shop and listen to that score and wonder How the heck did Sondheim do it? There are so many small moving parts to the music, themes that repeat and overlap and signal characters, it’s overwhelming. Also, that each of those parts is rich in melody, has the “hooks” of the greatest pop songs, and includes nods to opera as well as great musical comedy. The songs like “Pretty Women” and “Joanna” and “Not While I’m Around” are equal to or better than anything ever written by Sondheim, who don’t forget wrote “Somewhere” and “Send in the Clowns” and “The Ladies Who Lunch” just for starters.

Anyway, it’s a nice break from Roseanne, Kanye, Harvey, Melania MIA, and so on. Get down to the Barrow Theater ASAP. “Sweeney Todd” pie shop version is a joy. Sally Ann Triplett is a sensational Mrs. Lovett, Sting would be proud of her. She and Sesma and Piser had a very unusual rapport– I’ve seen this show so many times and yet I was very moved by the ending. It surprised even a cynic like me. Bravo!