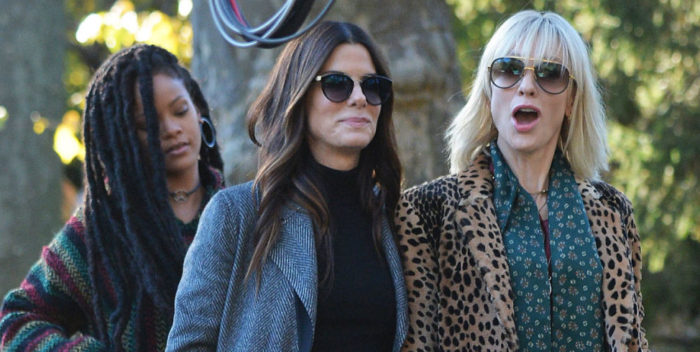 Didn’t get an invite tonight’s Met Gala, or Met Ball? Don’t worry, it will all be back next month on the big screen.

For “Ocean’s 8,” director Gary Ross and screenwriter Olivia Milch (daughter of “Hill Street Blues” writer David Milch) used the Met Ball for their main plot point. The many famous ladies of the cast pull off their heist at the event. The movie will be released on June 8.

For the movie, Ross re-created a fake Met Ball. So tonight’s Halloween party should bring a number of the famous cast members to the red carpet including Rihanna (a co-host), Sandra Bullock, Anne Hathaway, Mindy Kaling, and so on. Star Cate Blanchett won’t be there since she’s head of the jury at the Cannes Film Festival, which begins tomorrow.

George Clooney is very identified with the “Ocean’s” movies so it’s just a coincidence that his wife, Amal, is a co-host of the Ball. It’s very likely that Clooney makes a cameo of some kind in “Ocean’s 8” since he’s Danny Ocean and Bullock plays his sister.

Of course, there’s always a chance that some of the cast wasn’t invited– haha– that would be the ultimate snobbery!

Met Ball chief antagonist Anna Wintour is also featured in “Oceans 8.” Let’s hope she’s not a bad luck charm for the movie. Wintour was all over “Zoolander 2” a couple of years ago, and that movie was one of the biggest financial flops in movie history.