“oh by the way this is my book that I’m writing in real time. No publisher or publicist will tell me what to put where or how many pages to write. This is not a financial opportunity this is an innate need to be expressive.”

I told you the other day that Kanye West was back on Twitter after nearly a year away. Twitter founder Jack Dorsey even welcomed him back. But things have gone south since then with Kanye spewing “philosophy” and posting at the manic rate right before his 2017 departure. Is he brilliant? (Yes, in a way.) But is he having a manic episode? So far he’s running at 10 Tweets a day, mostly aphoristic one liners.

You do learn a little of how his mind works. Take sampling, a rapper’s main shtick. Kanye writes: too much emphasis is put on originality. Feel free to take ideas and update them at your will all great artist take and update…

find myself getting stuck in the idea of originality and letting my ego push me to say things like “this person stole this from me” and the funny thing is it’ll be a reference I took from somewhere…Cars have four wheels. Hoodies have hoods. It’s amusing to me when some one says this is an original hoodie. Bro… it’s a hoodie

A lot of it is euphoric, which I can’t say I don’t admire.

And there are several references about being lied to, and the value of truth. truth is my goal. Controversy is my gym. I’ll do a hundred reps of controversy for a 6 pack of truth

When Kanye left Twitter last year, it was just as he’d finished several barrages of narrative, attacks, and observations. Since then we haven’t heard much from him. At one point earlier this year he was rumored to have gone to a retreat in the mountains to work on a new album.

It’s not like there’s no reaction at home. Kim Kardashian, his wife and mother of his children, had this exchange with John Legend’s wife, Chrissie Teigen, also on Twitter: 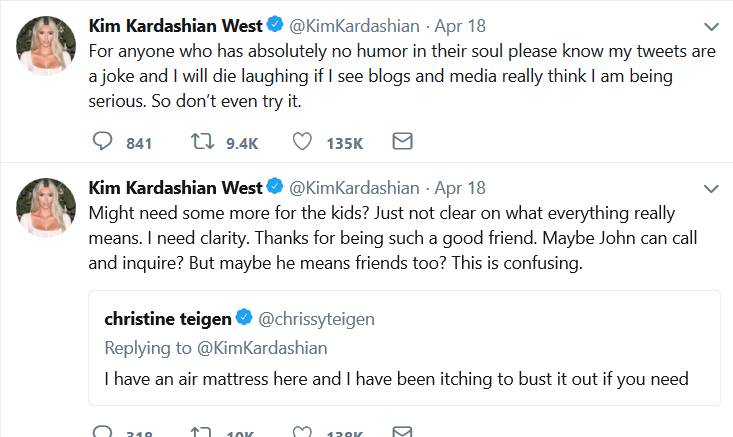