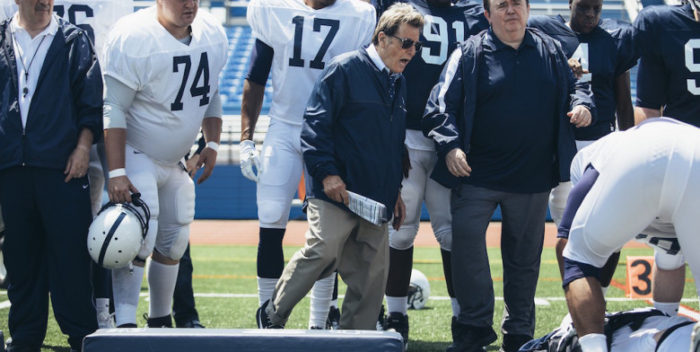 Saturday brings to HBO Barry Levinson’s “Paterno,” the Oscar winning director’s much anticipated snapshot of famed Penn State coach Joe Paterno at the end of his life, mired in a terrible scandal. This movie was originally going to be called “Happy Valley,” directed by Brian DePalma, with a different screenwriter and source material but also with Pacino. The latter film was canned over budget issues.

Levinson has made the economic and economical choice of making a character study with an ensemble cast. So Pacino leads a very taut group of actors who are given their moments as real life people who played a part in the unraveling of the decades of pedophilia at the hands of assistant coach Jerry Sandusky and the coverups that took place around it.

“Paterno” highlights a young local journalist, Sarah Ganim, who led the charge along with her editor, Jonathan Newhouse. But this is not “Spotlight” redux. While Riley Keough is outstanding as Ganim, and her trajectory moves the story forward, Levinson was right to keep the reporters secondary this time. He was more interested in Paterno, considered a God at Penn State for 61 years, and his downfall. Other movies in the future could tell different views of the saga. This was Levinson’s choice and it was a smart one.

There is no hoo-hahing here for Pacino, who restrains himself from chewing the scenery (he does it well) often. This Pacino will remind you of Michael Corleone at the end of “The Godfather, Part 2,” when he realizes that it’s all been for naught. Indeed, right at the beginning of this film, voice overs are heard of people discussing Paterno. Someone actually calls him “The Godfather.”

Of course, Paterno didn’t have any one killed. But it’s pretty clear from this film that he began covering up Sandusky’s miscreant behavior as early as 1976. He looked the other way, rationalized it, permitted, enabled– why? All to win — four hundred and nine wins altogether, and to build his empire. This was without regard to Sandusky’s victims, who were mortally wounded.

Pacino’s performance is intelligent and sympathetic but don’t take that the wrong way. Levinson is wrestling with the discovery by people around Paterno how this all happened– and they had little time to do it. He died quickly of cancer two months after the scandal broke. Your sympathy is for those around him, not for Paterno. But Pacino, in keeping it dialed down, makes you invest in him just as his inner circle did, to get the answers. It’s a really canny performance.

Riley Keough is sensational as Ganim, and is joined in her efforts by Peter Jacobson as Newhouse. I really Annie Parisse as Paterno’s daughter, Kathy Baker as his wife, and Greg Grunberg as Paterno’s morbidly obese and faithful son. (I hope he was wearing a fat suit.)

The whole Penn State scandal is a mini-series yet to be made. “Paterno” simply stands as a snapshot of a moment when everything went to hell fast. It’s not a documentary. It’s a narrative film and very, very good.