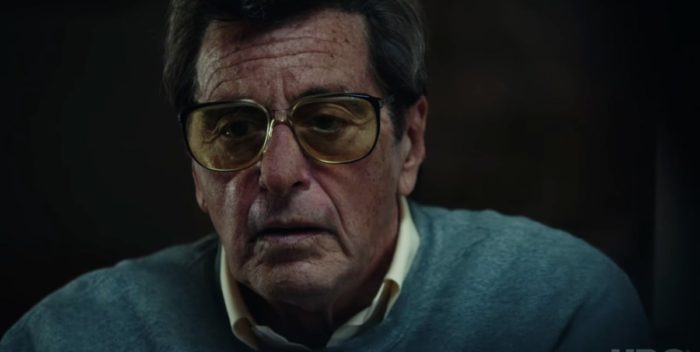 Al Pacino plays Penn State’s heralded football coach Joe Paterno in Barry Levinson’s very fine HBO film, “Paterno,” which premieres this Saturday. The movie is so sensitive on the subject of pedophilia and child abuse that on Monday night HBO feted Pacino with a small screening and no press.

But I caught up with the Oscar winner on Tuesday night at the first anniversary of Charles S. Cohen’s re-opening of the Quad Theater in Greenwich Village. The dazzling Quad is little movie palace now thanks to Cohen, a real estate magnate who owns the D&D Building here in New York and the Pacific Design Center in Los Angeles. He also captains a boutique film company that has one Oscar under its wing, for “The Salesman,” and a bevy of awards and citations for choosing quality films since his first release in 2008, “Frozen River.”

At the Quad celebration, Pacino — who was just the subject of a month long retrospective at the Quad — welcomed old friends like actresses Brenda Vaccaro and Lois Smith, and Peggy Siegal, as well as Oscar winning screenwriter of “Precious” Geoffrey Fletcher, actors Josh Charles, Aasif Mandvi, and Kevin Corrigan. Cindy Adams, Queen of Gossip for the NY Post, was taking notes fast and furiously for a column maybe we’ll see this week.

I asked Al about Paterno, complimenting him on the performance– but really. it’s Al Pacino, of course he nailed it. Pacino said, “Look what he’s doing” — Paterno, on the field, 409 wins– “he’s not playing around. I watched a lot of videos of him to get him right. I hope I got him right. I know a lot about it,” he added– oh yes, you may remember him in Oliver Stone’s “Any Given Sunday.”

“What’s your favorite?” Fletcher asked him.  I say “Serpico,” Pacino adds “Dog Day Afternoon, all that early stuff,” he shakes another hand. There are too many to mention.

I ask him, Did Al hear the voice over at the beginning of “Paterno” when someone calls him “The Godfather”? “I did, I did,” he said, big Pacino smile, eyes gleaming with mischief.

What’s next, I asked? “The Irishman! We finished The Irishman!” he said, still gleaming. This is Scorsese with DeNiro, Pesci, the most hotly anticipated movie of the year. And then, he’s off, back to magical Pacino land. He’s talked to everyone in the room, and now they’re all smiling, too.