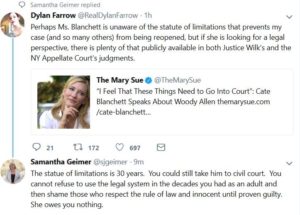 Samantha Geimer is crossing swords with Dylan Farrow on Twitter right now. Geimer, now over 50, was Roman Polanski’s rape victim when she was 13 in 1977. Geimer has time after time asked for leniency toward Polanski and supported the vacating of charges against him.

Now Geimer is taking on Dylan Farrow on Twitter. Dylan was the adopted daughter of Mia Farrow and Woody Allen who claims that Allen molested her when she was 7 in 1992. Investigators found no proof Allen did anything and did not recommend charges against him. Still Farrow–via her mother Mia Farrow and brother Ronan– has turned the persecution of Allen into her life’s work. (She has never, however, addressed the fact that Mia’s brother John Farrow is serving 10 to 25 years in prison for molesting two little boys.)

She writes on Twitter: “I object to those using the #MeToo only for their narrow interests when it is for all of us, about all of use, to support all our choices. We all should be reaching down pulling others up, not reaching up to pull people down.”

Dylan Farrow upbraids actress Cate Blanchett for not speaking out against Allen, who directed her to an Oscar in “Blue Jasmine.” Blanchett said in a TV Interview about Allen: “If these allegations need to be re-examined which, in my understanding, they’ve been through court, then I’m a big believer in the justice system and setting legal precedents. If the case needs to be reopened, I am absolutely, wholeheartedly in support of that.”

Geimer’s response is that Dylan could still file a civil action against Allen to prove her claim. But Dylan won’t do that– she doesn’t have a case, despite her mother and brother attempting to poison anyone they can against Woody based on hearsay.

Good for Geimer for calling out Farrow. She writes: “Ridiculous to attack those who think crimes should be investigated and tried in Court and ask instead that Twitter is now judge and jury for all accusations. You do not have to pursue charges as an adult, but if you do not, the consequences is there will be no guilty verdict.”