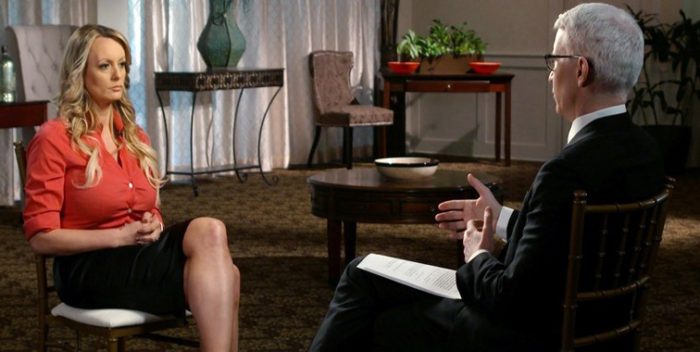 Donald Trump won’t like this, but people paid attention to Stormy Daniels last night like crazy. They watched in droves as Anderson Cooper interviewed her on “60 Minutes” about having sex with the multi millionaire businessman back in 2006 while his third wife, Melania, was pregnant with his fifth child, Barron.

From 7:30 to 8pm, after NCAA Basketball, “60 Minutes” scored 23.5 million viewers. In the second half hour, after Stormy had rained on Trump’s parade, the number went down to 19 million. By comparison, a really good average “60 Minutes” episode usually brings in 10 million viewers.

The show also offered an expert take from the former Federal Election commissioner regarding Stormy’s payoff of $130,000 by Trump lawyer Michael Cohen. Cohen could be in hot water legally as the money is considered a campaign contribution. It would be swell to see him punished for that.

Meanwhile, Cohen’s office immediately issued a statement after the show ran denying that Stormy was ever threatened by a “goon” who told her to keep quiet about the whole thing. Stormy says she could pick the guy out if she ever saw him again. Cohen better have him stashed away somewhere in Fiji.

Will it matter to Trump voters? Probably not. The men will all think, good for you, regarding their evil leader. Maybe the women who voted for Trump will think twice. But then again, nothing else has shaken their belief in this dodo.