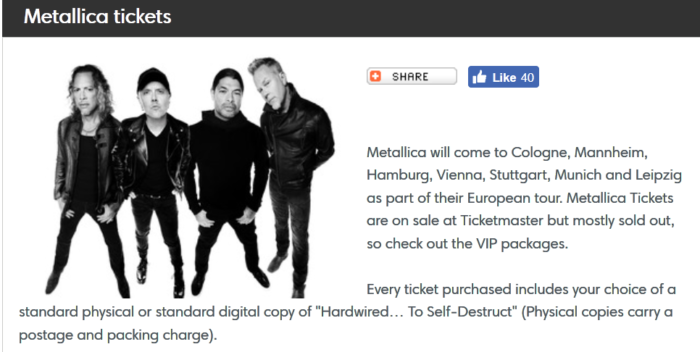 A couple of weeks ago I noted that Bon Jovi’s “This House is Not For Sale” had suddenly jumped to number 1 on the album charts. Despite being a couple years old, “This House” sold 130,000 copies out of nowhere, hit the top and then fell right off the charts again.

This week, Metallica’s 2016 album, “Hardwired…to Self-Destruct” is the number 1 selling physical album. The chart says Metallica sold around 65,000 copies and jumped from number 42 to number 1. Amazing!

Well, not so much. These chart toppers, as well as others in the recent past (Pink, for example) should all have asterisks next to their names in the record books. The CDs and downloads sold came as part of a bundle with concert tickets for the acts.

Metallica is selling tickets right now for Europe. And with every ticket sale comes a CD or download for free. So “Hardwired” is actually trip-wired.

Madonna and Prince each tried this years ago. More recently, with business struggling, the chart keepers have been persuaded to count these albums as sales. But they’re not, are they? They’re like the Thursday night box office previews that get counted into the Friday opening numbers for movies. They aren’t real.

But hey– congrats to Metallica. You can say you had the “number 1” album of the week.