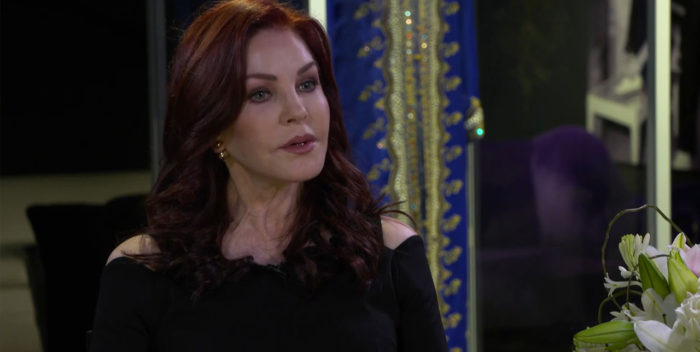 Elvis is back in the building. Maybe he never left the building. But on Tuesday morning the draw of meeting his devoted ex wife and keeper of the flame, Priscilla Presley, made us all overcome a snow and slush storm and brought us to the building– 30 Rock, that is.

A couple dozen journalists and rock people like famed photographer Bob Gruen put on their galoshes and headed to the restaurant adjacent to the Rainbow Room to meet the legendary Priscilla and talk about her HBO documentary, “Elvis Presley: The Searcher” elegantly written by Alan Light and directed by Thom Zimny. Visibility was limited, but Priscilla– who is now 72 and looks like she’s 50– was a beacon.

With Priscilla came Bruce Springsteen manager Jon Landau, who smartly exec produced and has a quantum knowledge of rock and roll as a real Rolling Stone journo from their heyday; Memphis songwriter David Porter (who just put his stamp of approval on a new Spanish recording of “Soul Man” by Sam Moore); and Memphis historian and Elvis specialist Jerry Schilling. They’ve been on the road since South by Southwest screening “The Searcher” and stirring the cauldron of Elvis history.

“The Searcher” is the perfect look at Elvis in 2018, especially if you know little about him or think he’s an old guy you’ve heard something vague about. Priscilla — mother of Elvis’s only child, Lisa Marie, grandmother of his actress descendant Riley Keough — has made it her business to keep Elvis’s flame burning bright. It was Priscilla who rescued Graceland and turned it into a destination for travelers all over the world– quite an accomplishment.

“The Searcher” is a smart film envisioned by Priscilla and helped by all those people I mentioned. It eschews all the negatives and locates itself on Elvis’s 1968 landmark TV special. It was a comeback for the King of Rock and Roll, who’d started to seem out of it to the generation of “Sgt. Pepper” and psychedelic rock. They’d forgotten that a decade earlier, Elvis was a god. So using this event as a culmination, Zimny uses the voices of Priscilla — as well as contemporary musicians like Bruce Springsteen and Tom Petty– to build a case for Elvis’s continued supremacy.

There’s a lot of photos and home movies, and the soundtrack is selective. The best video comes from the TV show, where you see a resurrected King at the top of his game. This should go a long way to erase what would come later in Elvis’s life. But this is the snapshot that will supersede the later days: right at that moment, from 1969 to 1972, Elvis is back. You see that “Suspicious Minds” and”Burning Love” were just as important as “Hound Dog” and “Don’t Be Cruel.” Zimny is very careful to fashion a new legacy. And for once, Elvis becomes a sympathetic hero who battled to survive a kind of fame that maybe only Sinatra and Marilyn Monroe knew in that era.