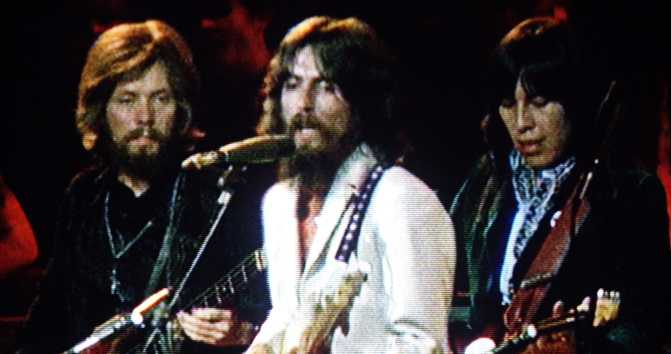 Everyone is celebrating George Harrison today on what would have been his 75th birthday. We love George as a Beatle, from “Here Comes the Sun” and “Something” to “Savoy Truffle.” But the George Harrison I celebrate is the man who gave us “All Things Must Pass.” I still have my original box with the vinyl. Those songs–from “I’d Have You Anytime” to “My Sweet Lord,” “What is Life,” “Apple Scruffs,” “Wah-Wah”– how they’ve held up over 48 years. And then there’s “All Things Must Pass,” the title track, which might have been a Beatles song but thank goodness it wasn’t. A masterpiece, a real of art. George had plenty of hits and did many great things but “Beware of Darkness”– particularly the “Bangla Desh” version with Leon Russell– remains magnificent.

So raise a glass to George– and also to his remarkable wife, Olivia, and their tremendous son, Dhani, both of whom have proven to be the most faithful, respectful keepers of the flame. This week, they’re released a new vinyl version of “The Concert for George,” in many configurations. I was lucky enough to be there for this all -star memorial on November 29, 2002. It’s so nice to have a lasting reminder.

Olivia & Dhani invite you to join them in celebrating what would have been George’s 75th Birthday today, by watching this performance of one of his loveliest songs, Isn’t It A Pity, here performed by his friends at the #ConcertforGeorge.
Watch: https://t.co/jylC6eg9T5 pic.twitter.com/l9lVWnipQT

The Beatles in 1957. George Harrison is 14 John Lennon is 16 and Paul McCartney is 15. pic.twitter.com/Mh7xeqIGXk